It's make or break time for the Czech football team: on Saturday they face the Netherlands in the first of two crucial qualifying games for next year's World Cup, a competition they last reached way back in 1990. If the Czechs beat Group 1 leaders Holland, and Finland next Wednesday, they could secure themselves an automatic World Cup place. But several important players are out injured and it won't be easy. I caught up with Czech goalkeeper Petr Cech at the team's Prague hotel, and asked him if he and his teammates were nervous ahead of the big games. 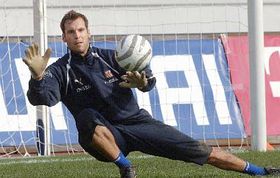 So how do you think you will approach the game against Holland?

"I think, because there is an obligation to win three points if Romania wins in Finland, we need to play well, we need to go for the three points from the start. But I think that's in our mentality, we're always playing to win. So we're going to do the same, even with the number of injured players and even though our opponent is tough." 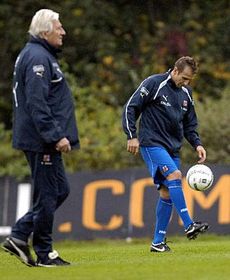 Coach Karel Bruckner and Karel Poborsky, photo: CTK Before the last World Cup the Czechs lost in the playoffs to Belgium. Are you really keen to avoid the playoffs this time? They're a real lottery. Is it something you're keen to avoid by winning the next two games?

"It's not really important the way you qualify. If we have to in the knockout stage we're going to play there and I think we could have a lot of confidence in those games. But we can still qualify directly from second place; we need to have six points and we will see, because some teams are one step forward and we need to wait for the other results. It's not in our hands and we'll see what happens."

Some of the team, like yourself and Milan Baros, are in their early 20s, but others like Jan Koller, Karel Poborsky and so on are heading towards the end of their careers. Would you say for the older guys there's more pressure to try to get to the World Cup? You'll have another chance.

"Of course they've been trying for such a long time, and they've never succeeded in getting through the qualifications for the World Cup. So for them it might be the last chance in their careers, or one of the last chances. Or course we would like to qualify for them because it's going to be nice for them to maybe finish in the national team in the World Cup."