Renovation of Wenceslas Square to begin next week

The City of Prague has received the necessary construction permit for the long planned renovation of Wenceslas Square to begin. At least half. The spokesman for City Hall, Vít Hofman, confirmed that work on the lower part of Prague’s most famous square, will start next week and should be completed by the end of 2018. 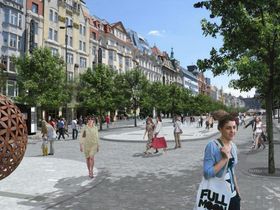 Visualisation: Cigler Marani Architects Plans for a complete renovation or revitalisation of Prague’s Wenceslas Square, a winning project by Cigler Marani Architects, have been on the table since 2005 but the wheels turn slowly when it comes to even minor changes, not least at one of the capital’s most famous and most-visited sites.

Renovation, for now, will begin only on the lower half, from Můstek towards Vodičková and Jindřišská streets. That had already been classified as a mostly pedestrian zone despite the stretch of road. Now a number of minor as well as major architectural changes will be introduced.

Prague Mayor Adriana Krnáčová expressed something like relief in talking about the renovation about to begin. On Wednesday, she spoke to Czech Radio Plus: 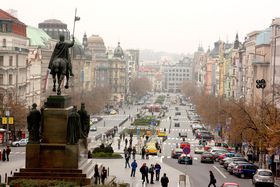 Wenceslas Square today, photo: Štěpánka Budková “After 15 years we have finally got permission and it wasn’t easy. It was necessary to get all the proper clearance and there were a lot of difficulties along the way. Among changes will be double rows of trees and the bottom part of the square will be a fully pedestrian area.

“It will be paved in with cobblestones and serve as an area where tables and chairs can be set up and once again serve the public as a cultural and social space.”

Only delivery vehicles or vehicles with special permission will be allowed through and the space through which any car will be able to go will be narrowed. There will be access ramps to new underground parking, the mayor confirmed. The idea has been criticised by the National Heritage Institute but Mrs Krnáčová maintains that in any such project compromises had to be made. The mayor again: 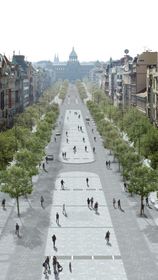 Visualisation: Cigler Marani Architects “Unfortunately there is no other way to solve the problem: in surrounding streets we would have to completely re-route traffic, a process that would have taken several years which I think would have left Prague very unhappy. Even Paris and Vienna have such ramps and it is not a problem at all in those cities. The important thing is for traffic to be handled so that the impact is minimal.”

The mayor has fielded some criticism that only the lower half of the square was being reconstructed for now. But she said that if the whole square had had to be decided, it would have taken “another 15 years”.

She said that of course the plans existed for the entire square. She described the process of getting to a green light now as immeasurably complex, saying there were some who would have preferred for the city to be preserved “as is” and never change, one of the reasons behind the marked delay.