Carpenters are completing a replica of a rare 16th century wooden church from the village of Guty in Silesia, which was ravaged by fire more than two years ago. The church was intentionally set ablaze by three youths, who are now serving time in prison. The replica of the church will be disassembled and erected in Guty as soon as it receives safety approval from fire officers. 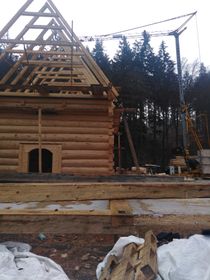 Photo: Gabriela Hykl / Czech Radio The Roman Catholic house of prayer dating back to the year 1562 was one of the best preserved wooden churches in the country. It boasted priceless wood carved interiors and paintings dating back to the first half of the 16th century.

The church, a national cultural monument, was intentionally set on fire by a group of three youths in August 2017. Given its wooden structure, it was ravaged within just a few minutes’ time. Even its bells melted in the blaze.

Now, carpenters from the village of Hošťálkov near the town of Vsetín, some 90 kilometres from the original location of the church, are close to completing its replica.

It is made almost entirely of pine wood, with the exception of the oak threshold and the 35,000 pieces of shingles, which are made of spruce. Antonín Papšík is the main coordinator of the renovation works:

“We had to study the traditional method of making shingles, find the right wood, split it into shingles and then taper them on a shaving horse. At the beginning, we would make around 20 to 30 pieces a day but as we improved our skills we managed to up to 80 a day.”

The carpenters are currently working on the roof of the church. After the whole base structure is completed, it will be dismantled and transported to the village of Guty, where the original 16th century church used to stand, explains Mr Papšík.

“We will put down the tarpaulin, dismantle the roof frame and gradually disassemble the walls. Each of the components will be given a number so that they can be stored, transported and reassembled again. My estimate is that the material will fill some 15 trucks.” 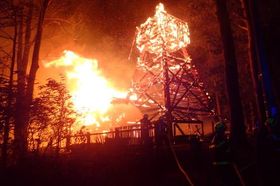 Wooden church in Guty on fire, photo: archive of Fire Rescue Service of the Moravian-Silesian Region In 2018, the youths who set the church ablaze were sentenced to nine, eight and three and a half years in prison, with the lowest sentence served to the youngest one, who committed the crime just before coming of age. They will also have to pay 19 million crowns in damages.

The cost of the replica of the church was covered mainly by the insurance money, as well as by a public collection called by local authorities and contributions from state and church institutions.

The new wooden structure could be transported and erected in Guty within the next few weeks or months, but it is unlikely to open to the public before the end of the year. The decoration and furnishing of the interior will probably take another couple of years.