It’s been described by one historian as one of the greatest finds about the Czechoslovak communist era. Several kilometres of film and sound were recently discovered at a factory and they cover the show trial of one of the country’s top communist officials. Details of the discovery and plans for the find were revealed on Thursday. 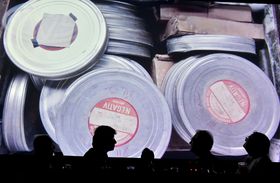 Photo: CTK Sixteen metal and four wooden boxes filled with negatives, film, reels of sound recordings, and archive material from the Central Committee of the Czechoslovak Communist Party. That was the strange discovery of insolvency administrators at a factory in Central Bohemia not far from Prague.

Although much of the material was damaged, the finders still appreciated its significance and called in historians who in turn called in the Czech National Film Archive. Much of the film material relates to the biggest show trial of the Czechoslovak communist era, that of former general secretary Rudolf Slánský along with 13 other accused.

General director of the National Film Archive, Michal Bregant, takes up the story:

ʺIt seems that we have approximately eight-and-a-half hours of the footage and there is the possibility that the communist party had the intention of making a documentary – in their terms – about the trial itself. They wanted to show the trial as a case of how an inner enemy with the communist party – using the historical terminology – had to be punished and was punished.ʺ 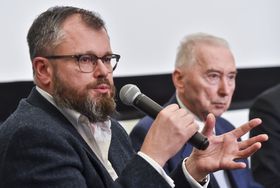 Michal Bregant, photo: CTK Slánský was not just another victim as the Czechoslovak communists started to hunt for domestic scapegoats as their dreams and promises of a brighter economic future started to fall apart within a few year of taking over power in 1948. He was one of the top party leaders as party general secretary and second only to the then leader and then president, Klement Gottwald.

And Slánský’s arrest in 1951 came after much agonising by Gottwald and fears that if he did not comply with Soviet wishes for a significant ‘traitor’ to be found he might have to fill the role himself. Moscow was suspicious of breakaway communists following the split with Yugoslavia’s Josip Tito, and prominent Jews, such a Slánský, fitted the bill for other reasons as well.

Slánský was imprisoned, tortured, and eventually forced to admit his guilt and learn the lines he would repeat in an eight day show trial in November 1952. He was among 11 sentenced to death with the sentence carried out at Prague’s Pankrác prison. The film footage covers all of the accused not just Slánský. Rudolf Slánský, photo: Czech Television Given the painstaking preparations and massive propaganda associated with the trial, historians long suspected a much bigger film archive than that which remained. The material spent some time in the interior ministry and then with the communist party central committee but much of its history is a blur.

The boxes of material are thought to have landed up in the factory hall during or soon after the 1989 Velvet Revolution when some members of the secret police or communist officials wanted to keep them safe. Whether they simply wanted to keep them hidden, sell them on at a later date, or had the intention of revealing them is not known.

Given the poor state of the material, restoration is estimated to take years and be extremely costly but the culture ministry has pledged to foot the bill.