One of the world's most famous film directors, Roman Polanski, was in Prague this weekend to attend the premiere of his latest movie Oliver Twist, an adaptation of Charles Dickens' classic novel of life on the streets of Victorian London. Oliver Twist is the latest major movie to be filmed in Prague, mostly at the city's Barrandov studios. So is it any good? Theo Schwinke, editorial director of Monitor CE, publishers of the Prague Daily Monitor, was at the premiere.

"I thought Polanski has made a really good film here. It's visually stunning to look at, and I think it's going to do very well with families. It's a step apart from the typical children's films like Harry Potter."

This isn't the first version of Oliver Twist of course. The most famous version was Oliver! by Carol Reed. How does Polanski's Oliver Twist compare to earlier films of this Dickens story?

"I think Polanski has done a really good job of staying true to the Dickens story in its spirit and in its letter. The characters are very much larger than life; they're almost caricatures of humanity, which I think is what Dickens was getting at."

It was filmed in Prague, as many films are these days. Does a lot of Prague come through on the screen?

"Not at all. It was almost entirely shot on the back lot at Barrandov studios, so they recreated numerous late 19th century London streets. I had an opportunity to visit the set when they wrapped production, and it was really, really effective the illusion they created. You really felt like you were on a street."

We just saw at the weekend a Czech film - Something Like Happiness - win Best Film at the prestigious San Sebastian film festival. But can you see a day when a big budget Czech film gains commercial success around the world?

"It could happen Rob. When you talk about commercially successful Czech films, immediately you think about films such as Kolya, which of course was not a huge money-maker. I suppose the film that everyone's got their eye on now is Jiri Menzel's project: he's trying to make a film of I Served The King Of England, the Bohumil Hrabal story. The story has been in pre-development for a long time, they've had some trouble with the rights to the story, but that has a pretty big budget and has had prestigious names attached to it in the past. If it gets made, and when it gets made, I think a lot of people will be expecting big numbers of out that." In Magazine: Czech students make a christening gift for Britain’s Prince George, preparations are underway for the festival of young… 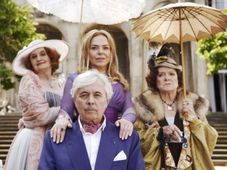 The film version of Václav Havel’s play Leaving hits the silver screen tonight, with premieres at Lucerna Palace (which his grandfather…

Amadeus, Mission: Impossible and Casino Royale are just a few of more than 70 international films shot in and around Prague since the…