Though little-known today, Marie Schmolka was for several years one of Prague’s key organisers helping Jewish refugees fleeing the Nazis, while she also helped arrange transports of children to the UK that saved hundreds of lives. On Monday Schmolka is receiving, in memoriam, honorary citizenship of Prague 1, as officials finally honour the heroic work she carried out in her native city. 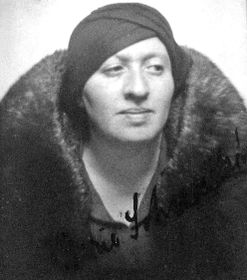 Marie Schmolka, photo: Public Domain I discussed her achievements with Martin Šmok of the Marie Schmolka Society and began by asking him about her part in the Kindertransports.

“Marie Schmolka’s involvement with refugees from the Nazis doesn’t start when the story of the Kindertransports starts.

“It starts in 1933 when the first refugees start coming to Czechoslovakia from Germany – and she never stops.

“However, what happens after the so-called Munich Agreement and the occupation of the Czechoslovak borderlands, and the so-called Kristallnacht, which should maybe be rather called the November Pogrom, is that Czechoslovakia receives such a huge wave of refugees that all the systems she helped to put in place broke down, overnight.

“So it was at this moment that Marie Schmolka, together with her co-worker Hannah Steiner, issued numerous appeals, addressing Jews in the Free World and all kinds of institutions and organisations involved in helping the refugees.

“It was to one of those appeals for help that Nicholas Winton actually reacted and rose to prominence, not only by his actual work here, before the Nazis occupied Czecho-Slovakia, but also by what he did after that in England.

“She was the one who worked with Doreen Warriner, who is the one who, based on Schmolka’s recommendation, accepted Winton as a volunteer to work for her office and then tasked him with the creation of the Children’s Committee.”

And what exactly did Marie Schmolka and these other people do?

“She was the person on the top in the efforts to help the refugees.

“She was the one building alliances, looking for funding and distributing tasks.

“She was coalition builder who brought together communists, all kinds of socialists, radical leftists, anarchists, but also leaders of the labour movement, women’s rights organisations, all the way to religious institutions and organisations: Jewish, Christian, and Messianic, who wanted to take the children so they would be re-educated and brought to the proper faith. 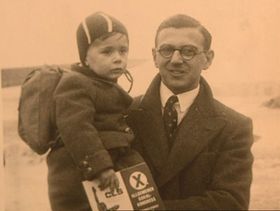 Nicholas Winton, photo: Czech Television “All of that went through Marie Schmolka.

“There is a statement I believe by Max Brod, the friend of Kafka, that until 1938 almost every refugee who passed through Prague met Marie Schmolka at some point.”

She and the other people involved in the Kindertransports were helping children because adult Jews weren’t allowed into the UK?

“The very reason for the organisation of what became known as the Kindertransports is the result of political lobbying by British activists on behalf of the refugees after the events of November 1938, who convinced, let’s call it the Parliament, that the immigration rules should be a little bit bent for unaccompanied minors.

“The next steps were to find the funding, because you actually had to deposit quite a substantial bond, you had to find somebody who would be willing to take the child in, because the child is an orphan – it shouldn’t become a public expense or nuisance or something like that.

“And you had to convince the parents to give their children up, which at least in my eyes makes the parents other heroes in the Kindertransport effort.

“A lot of this wasn’t done by Marie Schmolka, the top leader of the national committee for helping the refugees.

“A lot of this was done by volunteers coming from abroad, who were mostly women.”

After the Nazi takeover, Marie Schmolka was arrested by the Nazis. How did she survive?

“She was arrested in the very first wave of arrests, with other political opponents of Nazism known to the Nazi authorities.

“She was arrested in the offices of the refugee committee with her co-workers.

“She was interrogated. Her interrogations, as far as we know, were extremely long for someone who suffers from diabetes.

“We know from people who were in the same prison and sometimes even in the same cell how it destroyed her physically.

“Eventually she was saved due to interventions by certain Protectorate ministers – those were ministers of the puppet government set up by the Nazis after the occupation. 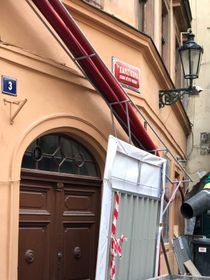 Marie Schmolka was born in this building in Prague’s Old Town, photo: Ian Willoughby “So Schmolka is released from prison and, in line with the Nazi strategy at that time, she is tasked again with handling the emigration flow of Jews.

“In the Eichmann trial he actually starts talking about Marie Schmolka and he is cut short by the chief judge – that this is of no interest to the court.

“So we never learned the additional details, but he actually starts admitting it: I actually did task Marie Schmolka with going abroad to negotiate the opening up of more chances for the emigration of Jews to the Free World.

“The story is that it was in Paris that the beginning of the second world war caught Schmolka.

“So she went to England and died from frustration and overworking in London.

“Why is all of this important? It’s important because for the general public, who maybe heard of Nicholas Winton but nobody else in the history of the Kinderstransports, what gets completely lost is the fact that the Kindertransport was an effort to that has a collective hero – in many countries, on many sides, and even Marie Schmolka is just one of them.”

The Marie Schmolka Society (https://marieschmolka.org), which is run by Martin Šmok and UK-based academic Anna Hájková, is hoping a memorial plaque to her will eventually be installed on the building where she was born a short distance from Prague’s Old Town Square.