Seventy-five years of driving on the right

March 17,1939 brought a revolution on Czech roads: the commander of the German occupation forces ordered a change-over to a right-hand traffic system with almost immediate effect. Although the change had been in the pipeline for years its immediate enforcement was not easy. Moreover, Prague was given a 9-day reprieve, creating a schizophrenic situation where drivers in the capital still drove on the left, but elsewhere around the country traffic was already moving on the right. 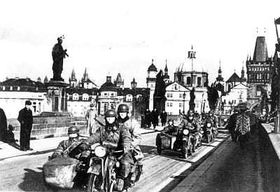 Although in 1920 Czechoslovakia signed the Paris Convention binding it to introduce a right-hand traffic system in order to fall in line with other European states, effecting the change proved both complicated and expensive and plans to effect the switch were repeatedly postponed. In 1931 Czechoslovak officials promised to introduce the change within 5 years at the most but this proved impossible. In 1938 the only countries in Europe still driving on the left were Czechoslovakia, Great Britain, Sweden and Hungary. In Czechoslovakia there were plans to effect the change on May 15 of 1939 but given the state of preparations it is highly unlikely that this latest deadline would have been met had it not been for the Nazi invasion.

As it was, the change was ordered with almost immediate effect by the German commander of the invading forces General von Brauchitsch to enable the occupation forces to drive as they were used to and move easily along the roads of the protectorate. An exception was made for Prague where a delay of over a week was deemed necessary to move hundreds of road signs, relocate about 100 tram stops and put up warning signs alerting both drivers and pedestrians of the change.

Although transport officials scrambled to secure a smooth transition the overnight switch caused numerous complications. For nine days there was the schizophrenic situation where drivers in Prague were still driving on the left while in the rest of the country traffic was already moving on the right. Entering and exiting the capital was major challenge. 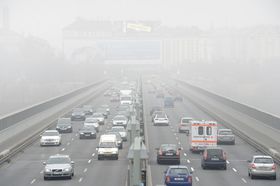 Photo: Filip Jandourek The day the change was introduced in Prague the authorities reported 26 accidents –including one road death when a pedestrian stepped into the way of an oncoming tram after automatically looking the wrong way. Dozens of small and big alterations were made on the go – such as doors on busses being moved to the other side. At first passengers stepped off into the traffic so the conductor would always get of first to ensure they got safely across the street. Two-way tram cars were better off and only had to have their destination boards refitted but one-way tram cars known as “ponorky” or submarines had to undergo large-scale reconstruction as a result of the change-over. Hundreds of tram and bus stops had to be moved in a process that continued for the next three years.

Although the switch to driving on the right made newspaper headlines for weeks and the roads were dotted with warning billboards it was months before both drivers and pedestrians got used to the change. Today the Czech Republic is one of 164 countries with a right hand traffic system and one cannot even register a car with steering wheel on the right –with two exceptions – veteran cars and specially made vehicles for disabled drivers. 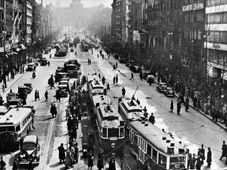 In the 1930s Prague was a modern city, with a passion for innovation. New buildings were springing up, celebrating the technology of… 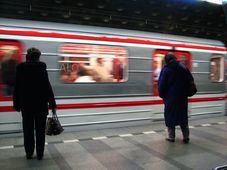 Prague metro 35 years down the line

Prague’s metro is relatively new in comparison to that of Paris or London, but in the course of its short existence, it has become…