Short-term contracts to get the boot

Imagine you are a sales assistant in a supermarket, where you have been working for the last five years. You have not yet been made a permanent employee, but this doesn't seem to be a problem as every three months you simply sign a new short-term contract. One day, you come to work and your boss tells you that your contract is not going to be renewed. Suddenly you find yourself on the street. A change to the Labour Code, which is being proposed as part of the government's effort to bring Czech employment law into line with EU norms, aims to make this practice a thing of the past. Coilin O'Connor reports. 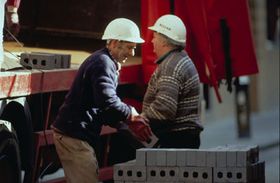 Photo: European Commission Up to now, firms have been able to sign agreements with their workers for a specific period. Once this time is up they can then simply decide to renew the contract or let the employee go as they see fit. The advantage of this is that, if a firm runs into difficulties and has to lay people off, it can do so by simply not renewing their work contracts. It also exempts them from having to make redundancy payments.

The Labour Minister, Zdenek Skromach, wants to limit short-term employment contracts to a maximum period of two years. If a firm wants an employee to stay longer than this, he or she would have to be made permanent. Jaroslav Jakubka from the Ministry's legislative department says the new measure would not only reduce unemployment figures, but also do away with a system that is often abused by employers:

"Entrepreneurs use this practice to transfer a business risk to their employees. Can you imagine a situation where we all go to work in the morning and sign a contract for a specific period of one day, and then we come again the next day and have to ask 'am I still employed or not?'"

The Czech Labour Office believes that misuse of this practice is widespread, which means that many Czech workers have very little job security. It also means that they have difficulty in getting loans and credit from banks because of their uncertain employment situation.

But there are also concerns that the change could be counter-productive, as firms may try to get round the rules by simply taking on someone else at the end of every two years.

Employers are also worried by another aspect of the proposed amendment that would make firms contribute to trade union budgets. Bedrich Danda, who is head of the Association of Czech Entrepreneurs, described the idea as "preposterous" and "incredibly audacious". He also warned that the proposed measure could cost firms as much as two billion crowns.

Labour minister Skromach, however, defends the idea, saying it is fair for there to be a certain level of employer participation in matters where the unions have an obligation to represent all employees and not just union members.

The bill is to be voted on by parliament by the end of this week and it is expected to pass, as it has the support of both the ruling coalition and the Communist Party.