The Czech Republic is the target for a massive expansion by one of Germany’s flagship firms, technology and engineering company Siemens. The type of investment is exactly what the Czech Republic is looking for as the country tries to secure skilled jobs with research and development tagged on. Siemens Frenštát pod Radhoštěm, photo: Michal Polášek Siemens is already well established in the Czech Republic with a workforce of 10,000 and thousands of other jobs connected to their local activities.

This week the company outlined its plans to invest around 7 billion crowns (around 267 million euros) over the next seven years in its existing Czech plants as well as create a new development centre for electric motors in the eastern city of Ostrava. The investments should create around 1,800 new jobs of which around a third should be in research and development and managerial positions.

What’s more, the investment has not been tied to the various investment incentives that Siemens could claim from Czech government agencies. Those possibilities are being investigated according to the state agency CzechInvest.

Siemens’ general director in the Czech Republic is Eduard Pališek. He gave some more details of what the investment involves.

ʺSiemens will be creating a new centre for the development of electric motors and generators in Ostrava. The services of that centre will be called upon by all the plants making such motors. The modernisation we are talking about covers all seven of our Czech plants. We will be introducing new digitalized technology in line with the 4.0 industrial revolution.˝

Industry 4.0 is a shorthand for the use of automation and data exchange in manufacturing which are contributing to the revolutionary changes which are expected to lead to tomorrow’s "smart factory.ʺ 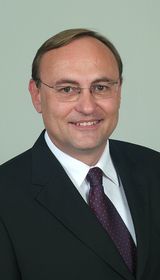 Eduard Pališek, photo: archive of Siemens The Siemens boss added that the performance of the existing Czech plants was a factor in landing the future investment and that the country was a very clear choice for the company:

Czech prime minister Bohuslav Sobotka described the investment as unique for its scale in the Czech Republic. He added that the investment was helping to position the country as a hub for the development of electric motors and putting it out ahead in the pursuit of new industrial technologies such as digitalisation.

Eduard Pališek pointed out that the investment would also be a platform for broadening its existing cooperation with a series of Czech universities and research agencies:

ʺThe important thing is that this investment will allow us to widen our cooperation with the Czech university sector and research agencies. The new Ostrava research and development centre at Ostrava will be the basis for that and we will be cooperating with Ostrava University as well as other universities."

The Siemens announcement follows the decision last year of US engineering and technology company GE to locate a plant for producing aircraft turboprop engines outside Prague with the creation of around 500 jobs. GE is one of Siemens’ biggest rivals across many industrial fields.