The Czech Republic’s main car maker and country’s biggest exporter, Škoda Auto, is sitting pretty amid the series of recalls damaging Japanese rivals. The problems facing the world’s biggest car marker, Toyota, and smaller manufacturer Honda should help the Czech car maker in its bid to break into new markets, especially in Asia.

Škoda Auto does not want to gloat over the problems of some of its Japanese rivals right now ― that would not be becoming. But there can be little doubt that the series of recalls that have tarnished the hard won reputation for reliability of the world’s biggest car maker, Toyota, and second biggest Japanese producer, Honda, can only help it.

Škoda Auto has also been building up its reputation for reliability in recent years. That is basically one of the foundations of its sale drive employing the slogan “Simply Clever.” Company spokesman Jaroslav Černý says that solid reputation is crucial to safeguard and build on its sales success.

“Especially in these hard times on the automotive market, it is very important to build an image and awareness. Without reliability you cannot build your sales.”

Škoda Auto has done so well on this front that in the wake of the latest problems on Tuesday a top betting company in the British Isles and Australia gave Škoda Auto the longest odds of suffering a major recall from around a dozen car manufacturers. It put the odds of Škoda suffering such a blow at 66:1.

While Toyota’s main markets are Japan and North America, it is still one of the major sellers in Western Europe, Škoda Auto’s biggest single market. With a market share of just under 5.0 percent in Western Europe last year, Toyota outsells Škoda Auto which grabbed 2.4 percent of that market.

But Škoda’s Černý points out that the battle for sales is truly a global one. 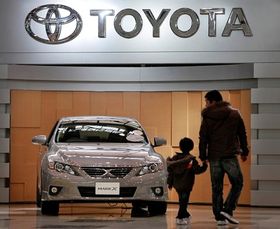 Photo: CTK Toyota and Škoda Auto are also likely to face off increasingly in fast developing markets such as China and India, where both see major expansion opportunities and have launched local production. Toyota last year had a 7.5 percent share of the booming Chinese market which in 2009 overtook the US as the world’s biggest single car market. Škoda Auto also has high hopes of continued expansion there.

“The decision of Škoda to go onto the emerging markets like China or India was good. We can see that from the sales. For example, last year in China we sold 120,000 cars, which was extremely good, and we still think that the market is growing and the potential is there.”