The official opening of Slavia Prague's new stadium on Wednesday night was a momentous occasion for the football club, who for seven years had no ground of their own while a reconstruction project dragged on at their traditional home at Eden in Prague 10. Fourteen thousand red-and-white fans turned out to see the ultra-modern stadium, and an exhibition game between Slavia and Oxford University - the two sides having first played each other in 1899. 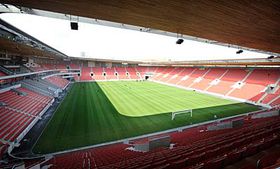 New Slavia Prague stadium at Eden, photo: CTK Fans inside the new 21,000-seater stadium at Eden cheered on both sides in Wednesday's friendly exhibition encounter. Slavia fielded former club legends like Patrick Berger and Pavel Kuka, while the Oxford University team was made up of amateurs. Richard Tur, leader of the Oxford party.

"The club has been associated with us for over a hundred years. The first match was back in 1899 and there are details in the clubs history again in 1907, and the final match until tomorrow was in 1936. We walked around the stadium this morning and it is marvellous. It is such a wonderfully small but modern stadium; I think there will be many fine matches there."

Oxford University student and player Lucian Weston said that playing at the stadium opening was an experience to remember. 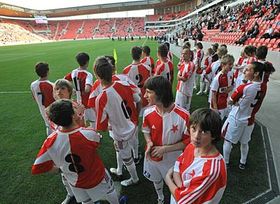 New Slavia Prague stadium at Eden, photo: CTK "Absolutely fantastic. For us that was a once in a lifetime experience. It was a great pleasure to be here, so thank you for having us. The crowd were absolutely tremendous, it was a fantastic day. We paid for it in the first minute though, having not touched the ball before Šmicer knocked his header in! At least we can tell people back home that it was him and they'll recognise him because he's such a good player."

Vladimír Šmicer - who last year returned to the club where his career began - scored the opening goal in Slavia's 5:0 win over Oxford, not that anybody was really keeping score. 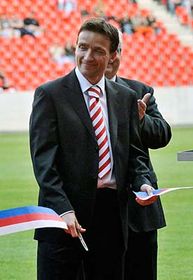 Vladimír Šmicer, photo: CTK "I think it was a really nice idea to play against the team that Slavia played as one of the first games in their history. I think it was really good game; we won but that was not the target for today and for tonight,. We are just really happy that we are back in our stadium, and hopefully the fans will be happy. It really was something special for me because I played at the old stadium here before I left to play abroad in France and England. I came back here last year and hopefully I'll be playing here again next season."

So you think it's a stadium that the club and the fans can be proud of? 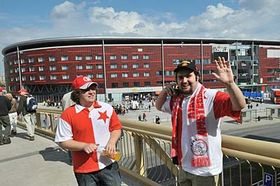 Opening of the new Slavia Prague stadium at Eden, photo: CTK "I definitely think so. Our fans were really waiting a long time for this stadium and I now think that it's one of the best stadiums in the Czech Republic now; of course it hasn't got a really big capacity, but for the Czech league it is enough."

There is speculation that Šmicer's good friend Patrik Berger may also return to the club this summer. In any case, he was clearly glad to be back where his career started.

"It was a massive day for the Slavia Prague fans, they'd all been waiting for this day for years; it was a massive occasion. And for me it was great to be here and be part of this; I'm very proud of that."

Is it nice to be back in the Czech Republic for a while, playing football here again? 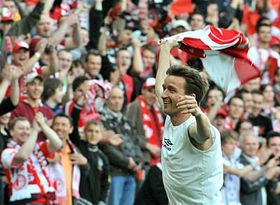 Vladimír Šmicer, photo: CTK "Yes it is, it's great to be back home, and this football club was the club that opened the door for me to the big football in Europe, and I'm very grateful for that."

Do you think it's the sort of stadium that the club and fans can be proud of, maybe moving with it into a new era for Slavia Prague?

"I think so. I think this new stadium could be like a twelfth player for Slavia Prague. Without a doubt, this is the place where they belong; for the last few years the club has playing in different stadiums, and they never felt like they were at home. I'm sure they do feel at home now though, and I'm sure everyone is looking forward to the new season"