The five-day conference on Holocaust era assets, held as the final major event of the Czech EU presidency, came to a close in Prague on Tuesday. Representatives of more than 40 countries around the world adopted the Terezín Declaration – a set of guidelines aimed at providing better care for Holocaust survivors, as well as at easing the restitution of property stolen during the Holocaust. 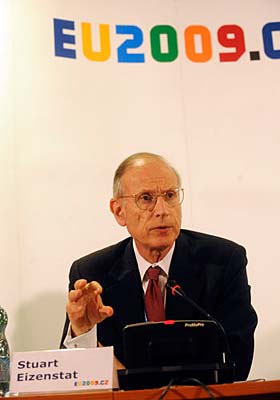 Stuart Eizenstat, photo: CTK The Prague conference has been the biggest and most comprehensive event ever held on Holocaust-related issues. Delegations from all EU countries, the United States, Israel, Argentina, and other states, agreed that two major concerns in particular deserve attention of the international community – social needs of those who survived the Holocaust, and restitution of private property taken away or sold under duress during the Nazi era. Stuart Eizenstat, who led the US government delegation at the conference, says that while it’s impossible to achieve full justice, some things can and should be done.

“What we have to do is what I call an imperfect justice. We have to do the best we can, sixty years later, to keep this on the world’s agenda, to keep the attention focused, to try to deal with a whole variety of issues that were never addressed before; like for example the restitution of private property, like the social needs of [Shoah] survivors. We found out that in Israel, in the United States, and in central Europe, large percentage of them, even in the US, in New York City, some 30 percent of them are living at or below the poverty line. So for the first time, we at the Prague conference have put the social needs to the forefront.”

The conference ratified the Terezín Declaration. Signed by all the participating countries and representatives of the European Commission, the document contains a set of non-binding guidelines aimed at a faster, more transparent and open restitution of both communal and private property that was taken during the Holocaust. Stuart Eizenstat again. 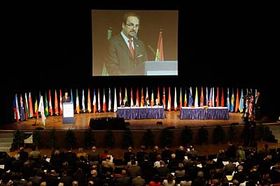 Photo: CTK “There are very few countries that have developed adequate private property – that is immovable, real property – restitution laws. And one of the things which are the essential focus of the Prague conference is just that. That is an issue which has not been addressed by any of the previous conferences.”

The first comprehensive, multi-country document of its kind also suggests that heirless property should be used, wherever possible, to fund care for survivors. The document commits countries to better monitoring of anti-Semitism, improved access to archives that facilitate looted art research, and to allow for the easier return of looted art. Tomáš Kraus is the secretary of the Federation of the Jewish Communities of the Czech Republic.

Terezín “I think the conference was a huge success, because 46 countries managed to reach an agreement on a certain principle. That should open up ways to certain issues a majority of politicians and members of the public considered to have long been settled and forgotten. Well, it turns out that’s not the case.”

For the first time ever, the Prague conference on Holocaust era assets also set up a special institute to oversee these efforts. The European Shoah Legacy Institute in Terezín will be located at the former ghetto where tens of thousands of Jewish people suffered during WWII. Its funding is yet to be determined but Stuart Eizenstat says it needs to start working now.

“The institute, according to the terms of the declaration, is mandated with the authority of 46 countries, to develop a series of best practices and guidelines in some of these very difficult areas, like for example, specifically private property restitution, where the deadline is no later than one year from the close of this conference – June 30, 2010.”