Something was “in the air” ahead of Velvet Revolution, Havel tells world’s media

Václav Havel, who led Czechoslovakia’s Velvet Revolution, discussed events at that time and developments since on Thursday, at his only public appearance ahead of the revolution’s 20th anniversary. The former president told reporters from around the world that 20 years ago no one knew when change was going to come, but people did sense that “something was in the air”.

Cameras flashed, as Václav Havel appeared before the world’s media on Thursday for the only news conference he is giving on the 20th anniversary of the Velvet Revolution. Wearing the same trousers he wore at the first news conferences in November 1989, the playwright and former dissident appeared alongside several friends and colleagues on stage at Prague’s Na Zábradlí theatre. 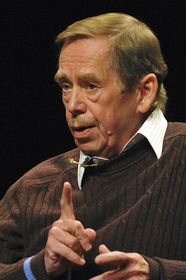 Václav Havel, photo: CTK “The fundamental course we then wanted society to adopt – that is, towards a democratic, lawful state, a greater freedom for its citizens, respect for human rights and market economy – all of this is being carried out and fulfilled. It is happening in an infinitely more difficult way, much more slowly, with a huge number of obstacles and unexpected situations. But I would not say that we have abandoned the fundamental ideals we had back then.”

Reminiscing about the time before the communist regime collapsed, Mr Havel noted that some change was bound to come – but nobody was sure when it was going to happen.

“I felt something was in the air – we all did. There were many various signs and preludes, and it was obvious that some snowball, no-one knew which, would start moving sooner or later, and turn into an avalanche, and that everybody would be amazed. We all felt that. But none of us knew what the snowball would be, when it would start moving and when it would turn into that avalanche.” 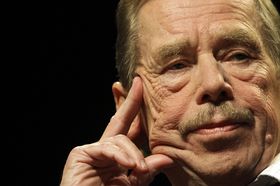 Václav Havel, photo: CTK On November 17 1989, Mr Havel in fact left Prague for his cottage in north Bohemia, because the eyes of the police and of the world media were already on him. He said he was concerned that if he himself took part in the student march, too much attention would focus on him, which he felt would not be fair towards the organizers.

“I was following developments on the radio, and I was beginning to feel that this wasn’t just one of many episodes ahead of the revolution, but that it might be the snowball which would start the avalanche. So I came back to Prague the first thing next morning, and we began to act.”

Despite the recent political turmoil on the Czech political scene, with a caretaker government, a dysfunctional Parliament, and the president threatening the Czech Republic’s position within the EU, Václav Havel said he was optimistic. Most of today’s politicians, he said, are stigmatized by communism, and so are their children. But the former president hopes the next generation will be different. 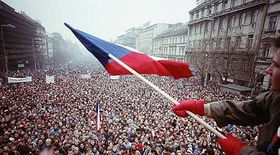 1989 “Sooner or later, the moment will come when the children of these children start entering public life. And this is a great promise for me, that the public arena will be thoroughly lit up and cleaned, that we won’t have to curse politics so much. And that people will enter public life who will know how to earn trust through their democratic self-confidence, even if they have minority opinions. That’s my hope for the future.”

While Václav Havel will not be appearing before the media again in connection with November 1989, he will be taking part in some of the events being held to mark the anniversary.