Czech football club Sparta has continued a solid run in the Europa League, downing Israeli side Hapoel Beer Sheva to take nine points in their group. Four stadium sections in Prague, however, were closed off on orders by UEFA’s Disciplinary Commission. The move was in reaction to inappropriate chants by Sparta fans in a previous match against Inter Milan. Sparta Prague - Hapoel Beer Sheva, photo: CTK First, the good news: Sparta Prague got the win they wanted on Thursday, downing Israeli club Hapoel by a score of 2:0. The Czech side was lucky on the first, a free-kick sent in by Bořek Dočkal which was redirected for an own goal by Bitton; Sparta captain Lafata then slotted in a second before half-time. Sparta are now unbeaten in four European home matches with three wins and a draw.

A problem, though, is what was seen as highly inappropriate chants from Sparta fans during a recent match against Inter Milan, humming deemed an expression of racism by UEFA’s Disciplinary Commission. As a result four sections, including the so-called ‘kotel’ (furnace), home to hard-core fans were closed off. Large banners, saying “No to Racism – Respect” covered areas of the empty stands, instead. Racism has been an issue in the past in the top Czech division for clubs like Sparta, crosstown rivals Slavia, or Viktoria Plzeň, who have all been penalized before.

On Thursday, Sparta Prague, which had argued that the recent humming was not racist in nature, was determined that no such display to be repeated. Above all, the team hopes to send the message that now or in the future racism will not be tolerated. The head of the club’s PR team, Ondřej Kasík. 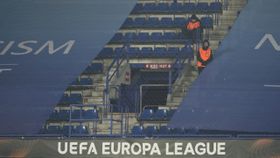 Sparta Prague - Hapoel Beer Sheva, photo: CTK “Of course it is a problem for us. There are two aspects: one is the economic impact as we are not able to sell tickets for those seats. But the far more important aspect is how the club is viewed in Europe. It is something we are very unhappy about and we want to see that image changed.”

Ahead of Thursday’s Europa Leaue match, the club prepared a special video reminding viewers racism has no place in football: appearing in the video were players Bořek Dočkal and Costa Nhamoinesu, stressing that all players spoke one language – that of the beautiful game. Nhamoinesu is from Zimbabwe. From the clip:

“The match against Beer Sheva is not going to be sold out. Is this something we really want? We are Sparta. We say ‘No to racism’.”