Wednesday was the most dramatic day yet for the Czech Republic at the Winter Olympics in Vancouver. Speed skater Martina Sáblíková made history when she became the first Czech to win two gold medals at one Winter Games, while there was also sensational news in cross country skiing with the men’s relay team taking bronze. However, there was also huge disappointment for Czech fans, when the country’s ice hockey team were knocked out in the quarter-finals. Martina Sáblíková, photo: CTK Martina Sáblíková has entered the history books by becoming the first Czech ever to take two gold medals at one Winter Olympics. Wednesday’s gold in the 5000 metres followed another in the 3000 metres and bronze in the 1500 metres, though Sáblíková’s third medal didn’t come easy: she finished less than half a second ahead of her nearest rival, before collapsing on the ice in exhaustion. She spoke to Czech Television after her latest success.

“The last three rounds I really competed for those people in the arena, because there were so many from the Czech Republic. I could see that many people were watching me. I raced for them and for my trainer, who always believed and told me at the start that I’d win the gold. He motivated me and shouted me on during the last three rounds.” 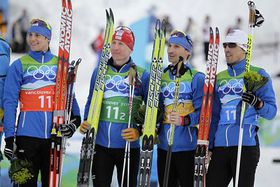 Martin Jakš, Lukáš Bauer, Jiří Magál, Martin Koukal (left to right), photo: CTK Her victory came only an hour and a half after a sensational result for the Czech Republic’s cross-country skiers in the 4 x 10 kilometre relay. Little had been expected of Martin Jakš, Lukáš Bauer, Jiří Magál and Martin Koukal after years of poor results for the relay team, and their bronze medal has been the biggest Czech surprise in Vancouver, where the country now has five in total.

Unfortunately the country’s ice hockey players won’t be able to add to that medals tally, after a defeat to Finland sorely disappointed the thousands of fans who got up early in the Czech Republic on Thursday morning to watch that quarter-finals tie. The Czechs failed even to get on the score-sheet in a game that ended 2:0; it is the fourth time in a row now that they have been knocked out of a major competition at the last-eight stage. Goaltender Tomáš Vokoun had this to say after the Czechs’ exit. 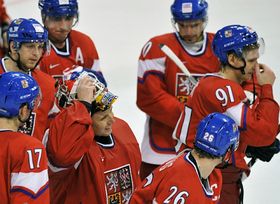 Photo: CTK “Of course it’s a disappointment. I’ve never gone to a competition with the idea of being satisfied with being knocked out in the quarter-finals. Hockey isn’t an individual sport so my own play isn’t so important – the team’s failure is my failure.”

The Czech Republic’s best hope of taking a sixth medal in Vancouver may well lie with skier Lukáš Bauer, who takes part in the 50 kilometre mass start classic on Sunday.