Viktoria Plzeň welcomed a star-studded Manchester City team on Tuesday for their first group game in this season’s Champions League. But while a spirited performance saw the West Bohemian club keep City at bay for the first half, the gulf in class told in the second and the visitors ultimately ran out comfortable 3:0 winners. 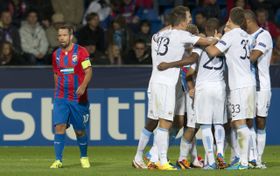 Nevertheless, in first half in particular the hosts combined confidently and tried to break forward at pace, managing to keep the score at 0:0 at the interval – and their hopes of an upset alive.

But an expensively assembled City side moved up a gear early in the second half, with goals from Dzeko, Toure and Aguero in a period of just 10 minutes killing the game off.

Manager Manuel Pelligrini said he had made no great changes to the visitors’ game plan during the interval. 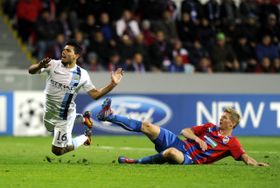 Sergio Aguero, Václav Procházka, photo: CTK “I think in the first half we had three clear chances to score also. We didn’t do it. But in the second half I think we gave our play one speed more and that was very important to create space against a team that had 10 players behind the ball. It’s very difficult. So I think what we started in the first half we finished in the second, but with two or three changes.”

City’s captain Vincent Kompany said the turning point came on 48 minutes when Dzeko found the net after being teed up by Aguero.

“I think the goal was very important for us. We had a couple of very good chances to score in the first half but the great thing is we didn’t panic. In the end we’ve got the players to make the difference and as soon as it came off it was a lot easier for us at that time. In the end we did exactly what we came here to do.”

Plzeň’s lone man up front, Marek Bakoš, was philosophical about the outcome. 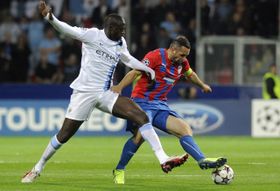 Yaya Toure, Pavel Horváth, photo: CTK “The match could have ended with a bigger margin, but it could also have ended with a smaller one. But the result is what it is. They’re world class players and they showed us how football is played. We can learn from them. If we do, that’ll only be a positive thing for us.”

Viktoria Plzeň’s next Champions League game is away to CSKA Moscow in two weeks’ time. With City in form and the group also featuring title-holders Bayern Munich, Plzeň’s most realistic ambition will be to come third ahead of the Russians; that would give them a place in the second-tier Europa League.