Just a week ago the Czech ice hockey player Jiří Hudler celebrated the greatest success of his career, when his club the Detroit Red Wings won the NHL’s Stanley Cup. Hudler, who is 24, is now looking forward to showing the coveted trophy to fans in his home town of Olomouc during the summer. Soon after he arrived at Prague Airport on Wednesday morning, I spoke to the young star about his Stanley Cup success, and the retirement (announced on Monday) of team-mate Dominik Hašek. Jiří Hudler, photo: CTK “It was unbelievable – it was the best time of my life. The whole playoffs was great, you know, just a great feeling. It was a great experience and now I understand why those guys like Draper, Lidstrom, Maltby, McCarty [Detroit team-mates] were so hungry for it.”

How did you celebrate?

“We celebrated in Detroit – there was a million and a half people, it was great, it was unbelievable…”

There was some kind of parade?

“Yeah, it was a parade, 1.5 million people. It was unbelievable – a great experience.” 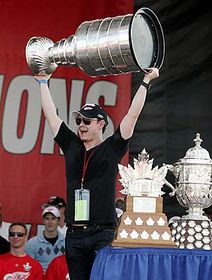 Jiří Hudler, photo: CTK What would you say you learned from winning the Stanley Cup, and winning it so young?

“It was such a great feeling – you get even hungrier. I’m glad I experienced it at this age.”

“It’s coming on August 4 and it’s going to be exciting. The whole town where I grew up and where I live now is so excited for me. I’m going to try to do everything to show them the cup. They can touch it and, you know, get the experience that I did.”

Finally, you of course played with Dominik Hašek. What was it like playing with him, and how long before he announced his retirement did you learn that he was going to quit?

“Actually, I didn’t know – I got a text message the night before from our PR guy saying, he’ll be glad if you are there. It surprised me a little bit but it’s his decision. He’s a legend, he’s a living legend, probably the best goalie who ever played, and I’ve got so much respect for him.”