It took 60 years but the Kumpera family will now be given back the Baroque Koloděje Chateau, confiscated by the state in 1948. On Monday the Prague Municipal Court rejected a final appeal and upheld a ruling from earlier this year which said that the property had been unfairly seized. Now nothing stands in the way of the property being returned its rightful owners. Koloděje Chateau, photo: CzechTourism Koloděje Chateau was used by both communist leaders and the country’s post-1989 governments for ceremonial events as well as cabinet meetings but that long chapter will now come to an end. On Monday, the Prague Municipal Court rejected an appeal by the state and upheld an earlier ruling, returning the property to claimant Vítězslav Kumpera, grandson of the chateau’s last owner.

His grandfather Antonín Kumpera, first bought the Baroque property before the Second World War, when he was the director of Czechoslovakia’s Waltrovka (Walter Motors). But it was confiscated after the war ended under the Beneš Decrees which sanctioned the confiscation of property from ethnic Germans, who had sympathised with Nazi Germany, as well as from Czech collaborators. But this year the court ruled that in Mr Kumpera’s case the decrees were abused; nor was it ever proven that he had collaborated. On the contrary, it was Kumpera himself who was persecuted by the communists who pressured him into leaving Czechoslovakia.

Forty years later his grandson took up the legal battle for the property’s return. Now, the owner has said he hopes to turn the chateau into a family museum open to the public. But he has also not ruled out the option to rent or to sell.

As of now the government will have to get used to no longer using the exquisite property, complete with its surrounding park, for future cabinet meetings and state events. Some members, like the Minister for Ethnic Minorities Džamila Stehlíková suggested light-heartedly on Monday she would miss the site: she told Czech TV tongue-in-cheek that the elegant surroundings had made everyone appear better at meetings and made clear it had yielded positive results. But in all seriousness, government representatives have of course stated it will get by just fine without the property. 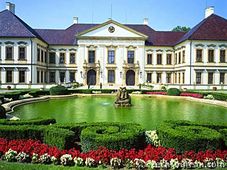 A stately home on the edge of Prague has been snapped up for just under a quarter of a billion crowns. The new owner of the well preserved…

A week after the government was ordered to return the Baroque Koloděje chateau to its pre-war owners, the Kumpera family, a regional…

Prague court rules in favour of descendent regarding Koloděje Chateau

A Prague district court has ruled that the Prague-Koloděje Chateau, used by the Czech government for sessions as well as events, is…