The Czechs may be out of the World Cup and the ice hockey season is long over - but fans can still take heart in at least one world class sporting event and that is none other than the Wimbledon tennis championships, where one Czech player at least is so far enjoying success. 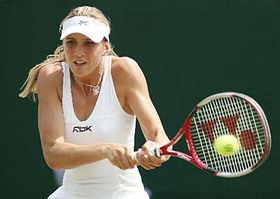 Nicole Vaidisova, photo: CTK Monday was a good day for one Czech player at Wimbledon - more on that in a moment - but otherwise it was a day of poor results: for example, crowd-pleaser and favourite Nicole Vaidisova was stopped by 27th seed Li Na is three sets on a day when the Czech player was clearly not at her best. Afterwards the seventeen-year-old Vaidisova who recently attracted attention on the world stage at the French Open, had this to say:

"I didn't really have the rhythm and she came out playing far better than I expected and really played well on key points. In the first set I served really well and broke in the first game, but after that we held service and the difference in the 2nd set was obvious. Of course I'm disappointed, I'm disappointed whenever I lose but on the other hand I'm sure I'll still get many more opportunities to play better. I can't expect to win every match. Now, there's nothing else to do other than go home and get some rest and then start training again." 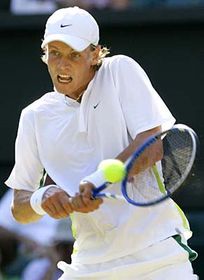 Tomas Berdych, photo: CTK Another Czech, Tomas Berdych also lost on the day: he was swiftly dispatched in straight sets by world No. 1 Roger Federer - no surprise there.

"My first serve in the second set was 100 miles per hour and that's not enough at this level, especially against a player like him. That's kind of like if you were playing football two men short. With [Federer] you have to be 100 percent ready if you are to have at least a chance and unfortunately that wasn't the case." 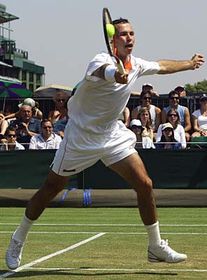 Radek Stepanek, photo: CTK But, Czech fans can take heart in at least one victory that by Radek Stepanek, who against the odds on Monday became the first Czech player to reach the Wimbledon quarterfinals since 1999. He didn't have it easy. Stepanek fought through a gritty five setter, from down two sets to one, to finally beat Spanish player Fernando Verdasco. The last Czech player to get as far on the grass courts in the tournament was former Czech women's tennis star, Jana Novotna. Afterwards, Stepanek told reporters that he felt he had "had more energy" and that even when he was leading 4:0 in the final set that he kept telling himself "not to give his opponent an inch". The final set ended 6:2.

In the quarterfinals, Radek Stepanek will now face Swede Jonas Bjorkman, who is 59th in the ATP standings. The two will face each other on Tuesday to battle for a spot in the semis. Should Stepanek make it into the next round, it will certainly be a headline grabber: and along the way Czech fans, of course, will be wishing him luck.