Jaroslav Hašek, the author of the world renowned book, The Good Soldier Švejk was born 125 years ago today. Celebrations across the country, and in particular in the town where Hašek is buried, have often taken an unusual form:

Jaroslav Hašek will forever be remembered as the man who brought Czechs a quintessential character – the Good Soldier Švejk. In fact, Hašek died of tuberculosis before he got a chance to complete his planned six-volume epic dealing with the subversively “loyal” Czech soldier fighting for the Austro-Hungarian Empire in the First World War. Many Czechs embrace the undertones in Hašek’s Švejk applauding and identifying with the underdog who uses humour to make the best of a tough situation – and who is often grossly underestimated by those above him. Among his other works, Hašek also wrote a number of short stories and essays.

To mark the anniversary of the writer’s death, the Czech town of Lipnice nad Sázavou recently launched the official 2008 year of Hašek celebrations under the auspices of the Hašek Association. Lipnice is the town where Hašek wrote a substantial part of his Švejk stories. He also died and is buried there. Among those present at the celebrations which included a marathon-reading of the author’s works was Richard Hašek, grandson of the author. Radio Prague spoke with Mr Hašek in Lipnice and began by asking how popular his grandfather’s work still was: 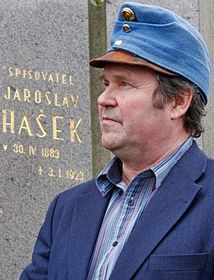 Richard Hašek, photo: CTK “I have to say that it is quite unbelievable. The Good Soldier Švejk is still being translated across the world. From Turkey to Russia – in Chicago a new third English translation is being done. But at the moment, he is most popular in the Baltic States, Ukraine and of course Poland – oh and there is also Germany and many, many other countries as well!”

So just how did Jaroslav Hašek find his way into the town of Lipnice?

“Well, that was a kind of curious situation. In around 1920, he wrote the first volume of Švejk in Žižkov, Prague. And because the situation for him was a bit odd there, his friends essentially got together in a pub – people like Jaroslav Panuška, Franta Sauer, Gustav Roger Opočenský, Josef Lada – and decided that they needed to shift Hašek somewhere where he could have a bit of peace and quiet in order to continue the work that he had already begun at such a brilliant tempo. His popularity was continuously growing, so they wanted to make sure that the work was carried on. So on 25 August 1921, he moved to Lipnice and that is where he stayed.”

Among the activities in Lipnice, other often unusual events are also taking place across the Czech Republic to mark the anniversary of Hašek’s death. These include a fasting event in Prague’s Žižkov and an exhibition that highlights the author’s apparent connection to numerous animals. Clearly, the celebration of Jaroslav Hašek, just like his creation Švejk remains as abstract and absurdist as ever. 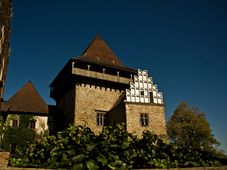 Lipnice Castle: the stone guardian of the Sázava region

There are two very good reasons why you should visit Lipnice. The small town, lying south-east of Prague, is dominated by a romantic… 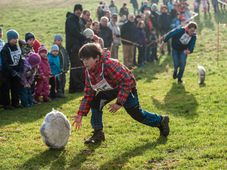 In Magazine: fun-lovers attend a bread-rolling competition in Turnov, the Bata Museum in Zlín exhibits old shoemaking instruments and…