Tension over monument to fallen Soviet soldiers in Brno

Kralovo Pole in Brno is dealing with a delicate matter at the moment. The district has a large memorial to Soviet soldiers who fell in April 1945 while liberating the city from Nazi rule and were buried there. The memorial displayed Soviet symbols - the five-pointed star and the hammer and sickle - ever since it was erected in 1946. The symbols were removed in the early 1990s, but now the star has returned. 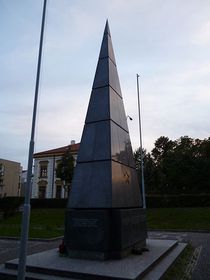 The monument in question, photo: Henta, Wikimedia Commons, License Creative Commons 3.0 Unported The monument in question is in fact a military burial site where, according to the inscription in Cyrillic, 326 soldiers of the Red Army were interred. The monument was erected in May 1946 and decorated with a hammer and sickle on the front and a five-pointed red star on top. These emblems, commonly seen as representing communism, were removed after 1989, but the star returned last year after pressure from the Russian General Consulate in Brno. Deputy Mayor of Kralovo Pole Rene Pelan says he understands the attitude of the Russians.

"They are very sensitive about it now, but I wish they would understand that nobody wants to disrespect the burials sites or the memorials to the liberators of Brno, but rather start a debate of the form and appearance of the monument. I suggested removing the monument and installing a boulder with the inscription 'To all victims of WWII'. It is still debated whether there are only Red Army soldiers in the grave, or maybe some Germans, or Rumanians, or even civilians. So that text that only celebrates the Red Army, might not be completely true."

Jiri Pernes This proposition met with little appreciation from the Russian Consulate. Alexei Kolmakov, attaché to the General Consulate, would not comment on the matter, but a press release from 22nd May 2007 maintained that any effort to "distort the truth and to libel the Red Army" and any destruction or profanation of the monuments to Soviet soldiers would be seen by the Russians as "adversary".

Historian Jiri Pernes says that the use of Communist symbols in this case is a complex issue since they were the official symbols of the Soviet Union, the country that liberated most of Czechoslovakia in 1944 and 1945.

"Quite another issue is the fact that the Soviet Union used symbols that were at the same time the symbols of the international communist movement. And if the Act on Lawlessness of the Communist Regime were to be taken seriously, the usage of these symbols should be prosecuted just like the use of swastikas. But in this case, the symbols are the armorial bearings of the Soviet Union whose soldiers died during the liberation of the Czechoslovak Republic and in my opionion, they belong there."

Rene Pelan The star returned to the top of the monument last year but the fate of the hammer and sickle remains unsolved. Will the town hall of Kralovo Pole take any steps to prevent their reinstallation? Deputy Mayor Rene Pelan say he would definitely be against:

"The fate of the memorial leaves me quite calm as long as nobody wishes to install any Nazi or Communist symbols on it, as in my perception of the world they are on the same level. It would be the same as if someone put a swastika on it. I would totally be against that. I think that 17 years after the revolution it is quite ironic that someone wants to place these symbols, for whatever reason, in Kralovo Pole. I don't know what the town hall would do, they do not have much authority in this, but I do know what my reaction would be. I would immediately file a lawsuit against unknown perpetrators for dissemination of these illegal symbols." 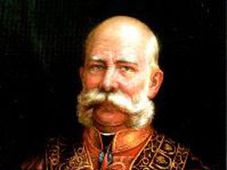 This Monday marked an important anniversary in the history of the Czech lands. It was exactly one hundred years to the day since the…