The Czechoslovak politics behind the 'Slovak National Uprising' of '44

This Sunday marks the 60th anniversary of the "Slovak National Uprising," the anti-fascist military action that began on August 29, 1944. In its simplest telling, the uprising was the culmination of years of planning by Slovak partisans, 18,000 of whom fought alongside 60,000 Czechoslovak soldiers against the Nazis and the nominally independent state of Slovakia led by President Jozef Tiso. But as Brian Kenety reports, the politics behind the uprising are far more complex. 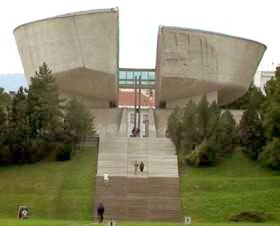 Monument of Slovak National Uprising Six months after the signing of the Munich Agreement, which overnight stripped Czechoslovakia of one-third of its territory and its defensible borders in an effort to appease Hitler, the "Second Republic" — as the old Czechoslovakia, minus its border regions, was known — Bohemia and Moravia were occupied by the Nazis.

Slovakia had ceded from Czechoslovakia the day before — on March 14, 1939 — to form an "independent" state under German "protection." Jozef Tiso, the Roman Catholic priest who had presided over the creation of an autonomous Slovakia the previous year, became president of the new Nazi puppet state.

By that time the Czechoslovak President, Edvard Benes, and other government politicians had already fled abroad — mostly to France and later to Britain. By July 1940, Britain had recognized Benes as the leader of the provisional "free Czechoslovak government in exile."

Benes fiercely denounced the declaration of Slovak independence in his London broadcasts as "an infamous act of treason" and vowed that there "would be a settling of accounts with all the collaborators" after the war, notes Stanislav Kirschbaum, a professor of international studies at York University in Toronto, Canada and the author of "A History of Slovakia: The Struggle for Survival."

"President Benes wanted a renewal of the [Czechoslovak First] Republic of 1920, the republic that he along with [Tomas] Masaryk and [Slovak war hero Milan] Stefanik had created. And he took it very badly that in 1938, first with autonomy and then in 1939 with the independence of Slovakia, that country was essentially broken up. So he wanted to resurrect that country; he had no other conception of any possible relationship between the two constituent nations, the Czechs and Slovaks."

Diplomatic recognition of the Czechoslovak government-in-exile had already strongly signalled that an independent Slovakia wouldn't emerge after the war. After the Soviet victory in Stalingrad in February 1943, Slovak and other groups in opposition to the fascists began to plan in earnest for the eventuality of a Nazi defeat. 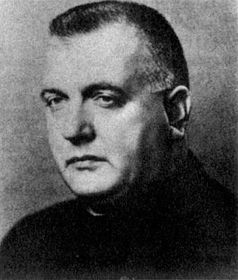 Jozef Tiso Putting ideological differences aside, and to counter Benes's determination to have a return to the status quo of the Czechoslovak "First Republic," the two main opposition groups in December 1943 united behind a political programme that became known as the Christmas Agreement, created the Slovak National Council and other intuitions, with the aim of being ready to assume control of Slovakia after the war.

The main opposition groups were the Democratic Party led by Jozef Lettrich and Jan Ursiny, which owed its allegiance to the Czechoslovak government-in-exile, and the CPS, an all-Slovak Communist organisation that was in constant contact with Moscow, led by Karol Smidke and Gustav Husak — who would decades later become president of a socialist Czechoslovakia. Ideologically opposed, they were united by a desire for post-war legitimacy.

"So these two groups, realising that something had to take place in order to give them any sort of legitimacy of course realise that at least coming together on some platform — which is what the Christmas Agreement is all about — would give them a first step into the arena, which would later give them political power in Slovakia."

"With that, of course, you've got two other players in the background." 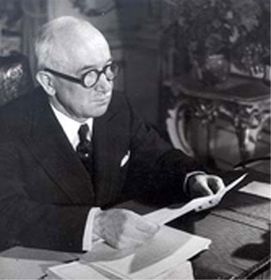 Edvard Benes "One of them is Moscow, and this is where, of course, you've got the constant linkage between the Communists in Slovakia and the Communists and the leadership of the Communist Party of Czechoslovakia in Moscow under [Klemet] Gottwald."

"And then you've got [the government-in-exile] in London and Benes. So, London is playing the only card it can play, which is [to say], 'Look, we're the recognised government of Czechoslovakia. You can't just ignore us. You're going to have to come to some agreement with us."

In his radio broadcasts Benes argued that the Slovaks would be spared the consequence of unconditional surrender only because of the "Czechoslovak government, the Czechoslovaks abroad who, thanks to their struggles and their work carried out in your name, defended the rights of pre-Munich Czechoslovakia."

For the better part of five years, Slovakia was spared much of the horrors of war. The country's Jews, however, were stripped of their property and human rights; two-thirds of the Jewish population, some 70,000 people, are thought to have died in Nazi concentration camps. Slovakia actually paid Germany in 1942 for the deportations, making it the only country during World War II to do so.

But Tiso enjoyed enough support from the general public that he walked through the streets of Bratislava without a bodyguard. Clearly, a political platform wasn't enough to gain the post-war legitimacy the Slovak opposition groups so desired. Military action was the only answer. The opposition began hatching plans to pave the way for the advance of the Soviet forces, for a massive uprising, says Prof. Kirschbaum:

" -- an uprising against the Slovak republic, against Fascism, against Germany, and which will then somehow give Slovakia the legitimacy that Benes claimed it could only have if it was seen on the side of the Allies." 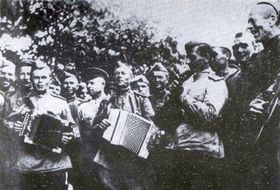 Red Army After the uprising would fail, some political legitimacy was achieved. In the fall of 1944, the leaders of the Slovak National Council did go to London to negotiate, eventually, the status of Slovakia in post-war Czechoslovakia.

In March 1944, some 3,200 Slovak soldiers had deserted. Most joined in partisan groups or the ranks of the Red Army. By late spring and summer of 1944, partisan warfare waged in various parts of Slovakia; Tiso initially thought the Slovak army and security forces could deal with the partisans. But as it became clear that the Slovak military and police forces were unwilling to deal with them, Tiso felt he had no recourse but to ask for help from the Germans.

In March 1944, with Benes's approval, the Slovak National Council authorised the preparation of a national coup to be coordinated with Moscow and timed for the arrival of Soviet troops. But the Soviets, regarding the Slovak resistance as politically suspect, failed to inform them of a change in Soviet strategy.

The chaotic military action began on August 29, 1944, two days after the murder of some 30 German diplomats. Partisans in western Slovakia were quickly captured, but the mountains around Banska Bystrica made it an ideal centre for the resistance movement.

The allies supported the uprising with massive aid, the Soviet Union and the United States flew in tons of supplies into partisan territory, while French troops participated in the actual battles. Within two month the uprising was crushed by the German forces, although partisan warfare continued up to the end of the war.

"A lot of it has been romanticised, a lot of it has been exaggerated. It is true there were some very well organised units commanded by NKVD officers, with Slovak officers on the side. We know there were partisan groups, also French partisan groups and others that came in. The First Czechoslovak Army was also involved, especially coming from the Soviet Union into the eastern part of Slovakia. And generally speaking, we know that a number of units of the Slovak army also went to the side of the partisans. But again, I have to repeat, that whilst it looks from afar like a united action, it was anything but."

The Communists would come to call it the "Slovak National Uprising," refusing to acknowledge the role Benes, the Allies, and non-communist partisans played in coordinating the action and presented it as a unified action by the Slovak people against fascism in favour of socialism.

Prof. Kirschbaum says that for the sake of ideology, Communist historians glossed over the complexities of the politics behind the uprising and its chaotic nature.

"It became a sort of ideological flag for the Communists. It was the legitimacy of their action, it was 'Slovak', it was 'national' and it was an 'uprising'.

"[But] because of the complexity of the entire situation, it is very difficult to paint it with one stroke and call it once and for all the 'Slovak National Uprising' because so many factions went in there, the presence of so many foreign troops had people ask, Was it really 'Slovak'? Was it really 'national' in the sense that did the entire nation or was it just certain groups who got involved in it, allow it to be defined as 'national'?

"And we do know that Communist historiography really simplified it to the point of making it totally ridiculous by refusing to [acknowledge] non-Communists as participants and as leaders of this Uprising."