The launch has just taken place in Prague of the Czech version of a novel looking at the Munich Agreement of 1938, when the UK and France gave the Nazis free reign to annex parts of Czechoslovakia. Written by Georges-Marc Benamou, The Ghost of Munich tells the story of the Munich conference from the point of view of the then French prime minister. The book looks set to be made into a film, directed by Miloš Forman and written by Václav Havel.

Georges-Marc Benamou, photo: CTK The Ghost of Munich saw its Czech-language launch on Monday before the public at Prague’s French Institute: on stage, French author and respected journalist Georges-Marc Benamou. He discussed his book as well as the day of betrayal in September 1938 which changed Czechoslovak history. Asked what had led him to take on the subject of “Munich”, the author said he had been inspired by a single photograph from September 30 of that year:

“The inspiration came, simply, from a photograph taken at Munich, showing Daladier casting his eyes to the side and Hitler triumphant, a radiant Chamberlain and Mussolini turned a little to the left. In France, Munich has always been talked abut and is probably one of the most disturbing political issues. The photo is one of the best-known images of the 20th century. ” 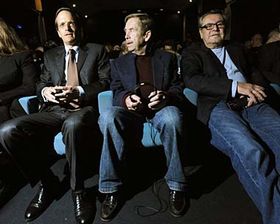 French ambassador to Czech Republic Charles Fries, Václav Havel, Miloš Forman, photo: CTK The Ghost of Munich is based on factual records, with a twist: the author put himself in Daladier’s shoes, hour-by-hour of the day of the fateful agreement, to events that followed, until the former leader ends up a recluse. As others have summed up, the book has all the trappings for a gripping feature film, one reason why Academy award-winning director Miloš Forman was approached. He is now at work on a script with another Czech luminary: playwright and former Czech president Václav Havel. They both attended Monday’s launch, where Mr Forman spoke briefly:

“I’d just say that Mr Benamou’s book is beautiful and that it moved me very deeply. It’s a novel – not a historical dissertation – it’s a novel about historic events which inspired him. And for us, the book is a spring-board for the film version.”

So far not much is known about how far the script has come but there is no question the project will be highly anticipated. Mr Forman’s last film was Goya’s Ghosts, which many critics judged as one of the few missteps in his otherwise stellar career. If The Ghost of Munich goes ahead successfully, it will mark Mr Forman’s first major new project since 2006.