Exactly 70 years ago, three former RAF pilots staged the greatest air escape in Czechoslovak history. Defying strict Communist security measures, they flew themselves, their families and a score of unsuspecting miners into West Germany. Their success brought them freedom, but also hastened the crackdown on any former RAF pilots remaining in Czechoslovakia. 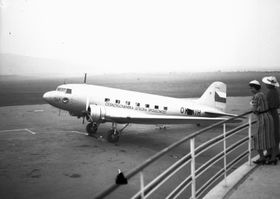 Douglas DC-3-220, photo: FORTEPAN / Lissák Tivadar, CC BY-SA 3.0 It had been just over two years since the Communists staged their successful coup d’état in 1948.

During that time they had already begun arresting individual suspected of “Western ties”. Among them were RAF war heroes Air Marshal Karel Janoušek and Major Josef Bryks.

However, another group had until now been more lucky. With a serious shortage of pilots, the Communists had to employ them to fly the country’s civilian aircraft on intrastate flights until a new generation of pilots loyal to the regime could be trained.

Among this group were former RAF airmen Ladislav Světlík, Oldřich Doležal and Vít Angetter. They hatched a plan in which they would take advantage of the fact that all three of their flights were headed to Prague at the same time on March 24, 1950.

During the two months of planning that preceded the action they told dozens of people about their idea, including family members, Czech Airlines staff and fellow former RAF service members.

Last but not least, they discussed the route of their escape in Prague Airport’s café the day before their action.

Historian Martin Ulrich told Czech Radio, why their scheming seems to have gone under the radar of the Communist secret police.

“It is important to state that while it was two years after their 1948 takeover, Communist security services were still under construction. The initial violence took place under the leadership of the Communist controlled Defence Intelligence Service. That had since been purged, with some of its leaders ending up on the gallows and others sentenced to prison.

“As far as the air force was concerned, it was still outfitted with old fashioned piston engine planes, Soviet MiG’s with jet engines were yet to be delivered.”

The pilots managed to smuggle their families and some of their old friends from the RAF onto the flights as well. Their wives used their maiden names so as not to arouse suspicion.

However, not all on board were anticipating a great escape, says historian Martin Ulrich.

“For the plane which was headed from Bratislava it was easy, as all of the crew and passengers were planning to get into the West. When it comes to the flights that took off from Brno and Ostrava it was different. Only a part of those on board knew about the plan. 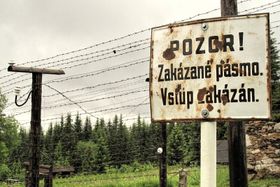 Photo: Jan Rosenauer / Czech Radio “For example, on board the plane from Ostrava, Ladislav Světlík was the only one of the four-man crew who knew about the action. He tied up the hands of the others with parachute strings to give them an alibi in case they returned to Prague and were investigated by the Communist police.”

The unsuspecting passengers, which included a mining delegation from Ostrava that believed it was headed for a conference in Prague, only found out where they were once the planes landed in Erding Airport, West Germany.

In the end, of the 85 people who who ended up on the other side of the Iron Curtain, 27 decided to stay. The rest returned to Czechoslovakia.

The escape shocked the Communist paper Rudé Právo, which wrote that the whole action used “gangster methods that must have been inspired by foreign influences” and the action warranted the production of a communist propaganda film depicting the event two years later.

New measures were also put in place, which included the presence of an armed policeman in civilian dress during all flights and the obligation for pilots to report their location every 10 minutes.

Meanwhile, the remaining RAF pilots in Czechoslovakia faced a new series of persecutions.