The journey of a Czech Christmas bauble from factory to tree

The Czech Republic’s best known exports may be Skoda cars and beer, but you might be surprised to find out that Czech blown-glass Christmas decorations are also big business. And they may well even be stocked by a department store near you – they end up on the shelves of Macy’s in New York and Harrods in London, and even the White House is decked out in them come Christmas time. 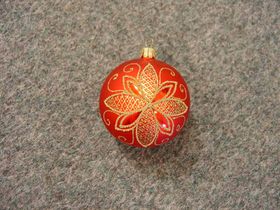 “This actually used to be a bead making factory, it was set up at the end of the 19th century by a Mr. Kincuch, who learnt his trade in Vienna. The factory was quite successful, but then, during the First World War, Japanese prisoners of war were sent here to work. So they learnt the secret of how to make these glass beads and, after the war, they went back to Japan and started to make these beads there, and priced us out of the market. So we stopped making beads, and started making blown-glass Christmas decorations. We became a cooperative in 1931, and we have been making Christmas decorations ever since.”

I visited the factory on a not-so-festive, grey October day. Why so early in the year? Because the factory actually shuts over the winter period. Mr Sorma explains:

“We start making Christmas decorations in March or April, and we stop around October 10, or October 15. This is because our clients send us orders for the following year only after evaluating their Christmas sales. So the orders come to us around early spring, and we can’t do anything before then. And we stop in October because stores already have their Christmas stock on sale by then, and they want the full order delivered by the time they put it on display.”

There used to be a school in Dvur Kralove which taught its pupils how to make Christmas decorations, from the blowing of the glass to the preparing of the paints used to cover them. This shut down, and so now people learn on the job. As Mr Sorma explains, this isn’t the quickest of processes:

“It is really demanding for us to train our employees, and it takes a long time too. To become a painter, it takes a minimum of two years, while it takes somewhere between three and five years to become a professional glass-blower. Maybe you can blow a traditional round bauble after half a year’s training, but to blow more intricate designs it can take up to five years’ practice. And it’s expensive. The cost of materials to train one employee alone amounts to 80,000 CZK (4,000 USD).”

nsistence that I give glass-blowing a go. But nonetheless, I made Mr Sorma take me to see how it was done.

“As you can see this lady is blowing the most basic of all of the shapes; she is making glass balls. After this we can look over there to see if someone is blowing any more complicated shapes, like little bells and Santas etc.

“When you are blowing a Christmas decoration, it is important to breathe out at a constant rate. And you can’t leave one bit of the glass in front of the flame for too long either. Because if you do, then the glass will distort. It will either start to bulge out or cave in. So you have to turn the decoration constantly. And it’s the same with the breathing out. You have to do it constantly otherwise you won’t get a sphere.”

The work looks rather delicate, and there is a lot of broken glass around. I asked one of the factory’s most experienced glass blowers how many breakages she had a day:

“It depends upon the quality of the materials you’re using, and the strength of the flame. But how many? Hmm, it varies drastically from day to day, so I don’t quite know how to answer your question. It really is almost impossible to guess.”

Mr Sorma takes me to the first floor of the factory where the baubles are first silvered, then painted, and then packaged for sale.

“So here we are in the silvering room. In the past we used a silver paint which had ammonia in it, but now we use hydroxide, which isn’t toxic. And here is the big vat which we dip the decorations in. We mix the solution differently each time depending, upon the size of the Christmas decorations which are going to be dipped. We apply the mixture to the inside of the decoration. This makes us different from other Christmas decoration manufacturers who only apply silver to the surface of the bauble. In this warm water, which is around 45 degrees, a chemical reaction takes place, which makes the baubles shine silver.”

One of the prettiest parts of the factory is the room in which the decorations are painted. I asked one of the painters to talk me through what she was doing:

“First of all I apply this glue, and then while it’s still wet I sprinkle glitter on top of it. Every day I go home covered in orange, red, gold glitter, glitter of every colour.”

Then its on to the final stage in a bauble’s manufacture:

“This is where we put the baubles into their packaging, we have our own presentation boxes, but sometimes our customers send us their own, branded packaging. We file off the glass tube we have been using to hold the decoration throughout its manufacture, and put a little cap on the bauble so that it can hang on the tree. We attach a price tag and barcode to most of these caps. And then we put them in a big box, and it’s off with them to our exporters.”

According to Messrs Dvorak and Thorovsky, the most popular form of bauble in Europe is the round ball. There were over 20,000 different types of them on display in their showroom in Jablonec.

But Americans are somewhat more adventurous with their Christmas shapes, as Mr Thorovsky, the man in charge of American exports, explains:

Christmas decorations make their way from Jablonec nad Nisou to the shelves of Macy’s and Bergdorf Goodman’s in New York. They also end up in one particular residence on Capital Hill:

… And what does the American President like on his Christmas tree? Did Mr Thorovsky send him this season’s must-have burgundy and orange baubles?

“No, I would say it was more classical than that. He went for some sliver, white and gold shades.”

Josef Dvorak is the man in charge of exports to the UK:

“We are exporting our Christmas tree decorations to Harrods, Selfridges, John Lewis’ and some garden centres around the UK.”

And I hear that both Manchester United and Celtic football clubs have bought your tailor-made decorations in the past. Did they ask for special things like team colours to be on the balls?

“Yes, so we also do a lot of made-to-order decorations. We tried to widen the market for our product, so we contacted some football clubs and different companies, and offered to put their logo on a bauble. And we succeeded and both of these teams, alongside Glasgow Rangers, and some hockey clubs went for it.”

Trends in Christmas decorations vary from one country to another, but there are a few key styles which crop up each year. So if you don’t want to hear how unfashionable your Christmas tree is, then switch off now. Here’s Mr Dvorak:

“Christmas decorations follow fashion as well. And here you can see this season’s trendiest colour – Mocca - it should even be fashionable in 2008 as well. But even though fashions change, there are three colours which will never go out of style. They are the most popular colours in the entire world – they’re silver, red and gold.”

… So Mr Bush isn’t far off the mark with his silver and gold tree.

But what about Czechs? What do they opt for at Christmas? And in which way is this different from, say, our Anglo-Saxon habits? I asked Zdenek Thorovsky:

“Czech people don’t decorate their trees so heavily as you can see here. And the other thing is that Czechs don’t buy a new set of ornaments each year. They take them down from the tree, store them away in a box, and bring them out again the following year. Maybe they will buy one or two pieces each year, but not a whole new set of baubles.”

“No, I myself do not put up a Christmas tree at home, because 365 days of Christmas is really too much.”

Unlike Mr Thorovsky, I am one of Christmases biggest fans, and I’ve been waiting since about August to put up my tree. Armed with some of the prettiest blown-glass baubles from Dvur Kralove and Jablonec nad Nisou, I embarked upon the final stage of my Christmas decoration project.

This year, I ended up with a little white tree, jam-packed with red and gold baubles and birds. My friends originally needed to be bribed with mulled wine to decorate my tree, but ended up doing a sterling job – it was them, and those blown-glass Czech Christmas baubles that did it.