The Lidice massacre after 65 years

On the morning of Wednesday, 10 June, 1942, the village of Lidice, about 20 km North-West of Prague, was destroyed in retaliation for the assassination of Reinhard Heydrich, the highest ranking Nazi official in the Protectorate of Bohemia and Moravia. Sixty-five years after the massacre, some lesser known facts are still emerging.

Lidice "As the inhabitants of the village Lidice near Kladno committed the harshest offence by supporting the assassins of SS Obergruppenfuhrer Heydrich, the male adults have been shot; women have been transported to a concentration camp and children given proper re-education. The buildings of the village have been leveled to the ground and the name of the community has been deleted." This was the official broadcast of the Protectorate radio that was aired the very day that saw the destruction of the village. The Lidice massacre, proudly announced by Nazi propaganda, raised disbelief and anger in the outside world. Eduard Stehlik is an historian for the Military Historical Institute and the author of Lidice: The Story of a Czech Village.

"Even after 65 years, everybody considers the official Nazi report of the destruction of Lidice to be correct. It says that all men were shot, women were sent to a concentration camp and children re-educated. The reality in fact was much worse than that. Along with the men, boys of over 15 years of age were also killed. At that time, maturity started at 21, so the Nazis were murdering children, too. The greatest lie, which still appears in encyclopedias and textbooks, is that the children were sent for 'proper re-education'. In fact, out of 105 children, 88 were murdered. That's not proper re-education, that's vile murder."

Three of Lidice's male inhabitants survived; two were fighting in the RAF in England during the war, while the third was in prison in Prague at the time of the massacre. His story is featured in the novel I served the King of England by Bohumil Hrabal. Eduard Stehlik says Hrabal's account is correct.

"That man was Frantisek Sajdl, the deputy-mayor of Lidice from before the war. He killed his son in a family quarrel in 1938 and was released from jail in December 1942, several months after the massacre. He didn't learn about it in prison, and he came home only to find out that the valley was empty and there was no village left. Only then did he learn what had happened and that he had lost his two other sons."

Mr Sajdl, evidently confused and desperate, then turned himself in to the Gestapo in the nearby town of Kladno.

"They laughed at him, as they thought it was some kind of bad joke. But they still checked him out and when they realized was telling the truth, they told him to go away. He was so desperate that he even said he approved of the Heydrich assassination, which, six months previously, would have been a capital offence. By then, however, it was no longer a crime and the Gestapo kicked him out. He really survived the Lidice massacre because he had killed his own son." 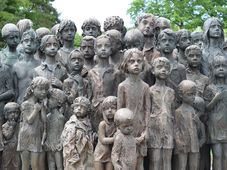