The famous automobile manufacturer Škoda Auto presented its newest model at a special unveiling in Tel Aviv on Thursday. The hatchback, which is called Scala, is expected to cost around USD 15,000 and will enter the market in April next year. Škoda hopes to sell 10,000 models in the Czech Republic alone. 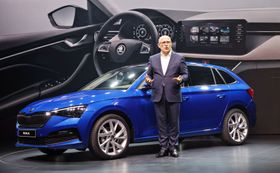 Bernhard Meier, photo: ČTK/Martin Štěrba Around 400 guests from 22 countries gathered in Tel Aviv to witness the unveiling of Škoda’s new model of cars. The choice of location was no accident, Škodas are the most popular European cars on the Israeli market and the manufacturer recently announced new partnerships with various high-tech start-ups in the country.

Hearing about the innovation environment in Israel was not why most of the guests had gathered in Tel Aviv however, and Škoda CEO Bernhard Meier soon got down to business, describing some of the features that the car has to offer.

“Scala demonstrates a completely new interior concept, with new applications you would normally only expect in higher classes. Clear proof of this can be seen with the large central display, our new command centre for both the driver and the front passenger. It is the largest type in this segment of cars as well and so is the car’s cockpit.

“In terms of connectivity the Scala takes a huge step too. We have equipped it with the latest generation of online mobile services. A very special feature is updates over the air.”

The Scala is seen as the successor of the 2012 Rapid model, whose price range lay between the Fabia and Octavia. Luděk Vokáč, from Lidové Noviny, who specialises in the automobile industry, told Czech Radio it measures up to its hatchback competitors, a segment of cars in which Škoda currently holds a 2.3 percent stake.

“At first glance the Scala looks as a more mature model than the Rapid, so it is likely to serve as a stronger competitor to the established models in its segment such as the VW Golf, Ford Focus, Opel Astra and others. Škoda certainly wants to double its percentage stake in this segment.” 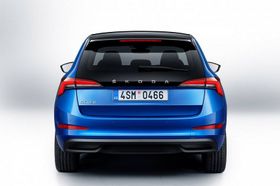 Škoda Scala, photo: Škoda Auto Another difference to the Rapid is the expansion of the Scala’s target audience, which is now primarily directed at younger, sportier group of drivers. An appeal that is noticeable in the cars tougher looking front design.

Škoda’s Executive Director for the Czech Republic, Luboš Vlček, told the Czech News Agency that the target for 2019 is to sell around 10,000 Scala’s in the Czech Republic alone. The company’s manufacturing plant in Mladá Boleslav is set to begin producing the model in February, with the first Scalas appearing on the market in April 2019.

The exact price of the car is yet to be unveiled, but experts predict it to be around USD 15,000, slightly above that of the current Rapid Spaceback.