The two-thousand words that started the Prague Spring

Friday marks the 40th anniversary of the “Two-Thousand Words”, a declaration that was one of the first and most important steps of the national revival referred to as the Prague Spring. The manifesto, which appeared in several publications, posed important questions for the future of democratic reforms in communist Czechoslovakia. 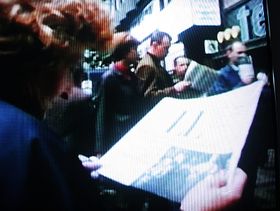 On June 27th 1968, four publications Literarní Noviny or Literary News, the newspaper Mladá Fronta and two others published a manifesto entitled “Two thousand words which belong to workers, farmers, officials, artists and to everyone.” They were written by Czech writer Ludvík Vaculík at the behest of several prominent Czech scientists. The manifesto expressed a fear of hard-line conservative elements within the communist guard – and openly speculated about a Soviet invasion. But the language was also deliberately non-provocative, criticising anti-communism and calling for civic engagement. Former dissident Jan Urban, who was 17 at the time, explains the context:

“The 2000 words manifesto was the first public show of discontent or opinion unconsulted with the communist authorities since 1948 when the communists took power. So it is important both emotionally and politically on one hand, and on the other it was devastating for the old style communists, and accepted and perceived as a tremendously important show of new public self-confidence. It is a truly historical document and I think that its importance should not be forgotten.”

Following the death of Stalin in 1953, Czechoslovakia embarked on a very slow process of an easing up of the absolute terror that had existed during the Soviet leader’s rule. Ten years later, a power struggle took place within Czechoslovakia and the ascent of Alexander Dubček brought around the gradual liberalization of Czech politics. I asked Jan Urban to describe the impact of the 1968 document.

“It was a synergic effect of several factors that within around 48 hours convinced people that change was really possible after 20 years of communist power. And the fact that its authors did not consult the powers about the document’s publication, and the fact that several newspapers published the text at the same time – everything about this was saying “We don’t need the communist party anymore. We can do things on our own.”

Unfortunately, the story does not have a happy ending, and the Soviet Invasion that followed the Prague Spring again stifled freedom of expression for many years. But the “2000 words” document is a crucial milestone - after the brutality of WWII, followed by a new form of brutality brought about by the country’s supposed liberators, this was the first time that enough prominent Czechs came together to substitute fear for a demand to be heard.