Some well-known historical sights of Prague, such as Brevnov Monastery or Troja chateau, have this week been filled with the sound of old music. The current Letni slavnosti stare hudby (Early Music Festivities) are the eighth - and this year the focus is mainly on French music and theatre.

Lovers of old music and historical architecture have a unique opportunity to enjoy both at the same time. The festival of early music brings together beautiful architecture with music of various historical styles performed on period instruments. Visitors can hear well-known composers such as Bach or Vivaldi, as well as some unique and rarely performed pieces of music. Jana Semeradova is the artistic director of the festival:

"As the title suggests, the festival is focused on old music and the underlying theme of this year is 'journeying through centuries'. But we won't be travelling too far; we will mostly stay in the 17th and 18th centuries. This year, the festival offers several thematic series: French music and theatre, music and dance and music as such, that is concerts."

Jana Semeradova also explains why it is the French style that dominates the majority of this year's productions:

"We chose French music because we have focused on France before and because we have been cooperating with the festival in Sable. They have been sending some leading artists to the Czech Republic and sponsoring their concerts. In previous years we had an opportunity to hear artists such as Jarrousky, and one of the biggest stars this year is Gerard Lesne."

The famous French countertenor has come to Prague with a very special programme: French and Italian music which was performed at the court of Louis XIV. Another highlight of the festival will be a Renaissance spectacle presented by Polish Dance ensemble from Krakov. The performance is inspired by da Vinci's painting Lady with Ermine and a historical dance piece, for which Leonardo da Vinci designed costumes and stage. One of the most interesting productions will be presented on the last day of the festivities:

"The icing on the cake will come at the end of the festival: it is a performance based on Moliere's comedy Scapin's Skulduggery. Three French actors specializing in Baroque gesture and recitation will present their performance accompanied by three Czech musicians. It is a modern interpretation based on the baroque foundation of this unique work of art by Moliere."

The French musical and theatrical group will also stage La Fontaine's Faibles. To keep the spirit of the period, both of the pieces will be presented by candlelight. Those who prefer to stay under the open sky can visit the intimate performance by the Czech ensemble Collegium Marianum staged in the beautiful Vrtbovska zahrada garden or make a trip out of Prague to the castle in Dobris. The festival comes to a close on 8 August.

For more information go to www.collegiummarianum.cz/cz/festival/festival (in Czech) 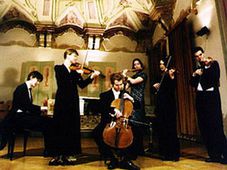 Carp and Carols on Christmas Eve

One Christmas carol that doesn't hail from the Czech Republic is the one about Good King Wenceslas, although he is this country's…