The Czech Republic’s premier film showcase, the Karlovy Vary International Film Festival, came to an end on Saturday night. In its 45th year, Central Europe‘s biggest film event drew some 127,000 viewers with its selection of over 200 films, about a quarter of which were premieres. So who took home the Crystal Globes this year? 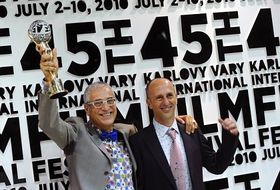 Producer of 'The Mosquito Net' Luis Miñarro, director Agusti Vila (right), photo: CTK This year’s winner of Karlovy Vary’s main prize, the Grand Prix, is the Spanish movie The Mosquito Net. The award comes with a 30,000 US dollar cash award. It was presented to director Agusti Vila at the festival’s closing ceremony, which took place in Hotel Thermal’s Grand Hall on Saturday night. He had this to say about his film, which deals with guilt complexes of a well-to-do family and stars Geraldine Chaplin, the daughter of Charlie Chaplin.

“The problem of our times is that often people try to deny that there is a tragic element to life, one that we have to accept. And to deny it exists is to deny a part of human existence. All characters in the film are denying that this tragic element is there, they are kind of trying to stretch this mosquito net over themselves to protect them from tragedy. 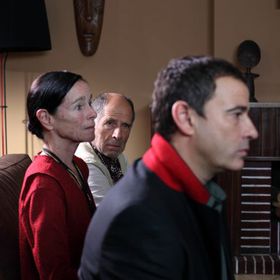 'The Mosquito Net' “And that is comical, in the same way that seeing an actor fail is comical, just as it is funny when the actor trips and falls on the floor in silent films. The actors in this film slip as well, all of them slip morally, and the viewer can laugh about that. But I also understand that this film could be understood as a tragedy. Because the fact that the characters are trying to escape tragedy is tragic and comical at the same time.”

Many critics agree that the jury, headed by American producer Ron Yerxa, this year settled on what could be described as the safest choice. The Mosquito Net is a film that does not offend, and at the same time was not amongst the most-discussed films of the festival.

Other winners included Czech director Jan Svěrák, whose animated film Kooky won the Special Jury Prize and was a favorite with audiences. It comes with a cash award of 20,000 US dollar. The Best Director award went to Croatian director Rajko Grlić, for his submission Just Between Us, which explores the theme of adultery. 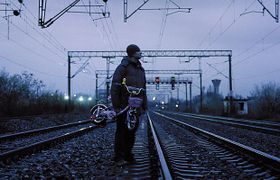 'Aurora' In the festival’s East of the West section, which showcases films from Eastern and Central Europe, Romanian director Criti Puiu took home an award for his film Aurora, in which he also plays the main part. Earlier this year, it was screened as part of the Un Certain Regard section at the 2010 Cannes International Film Festival.