A new sculpting project is to open up one of the few original streets of Prague’s former Jewish ghetto to the public. Sculptor Aleš Veselý’s “Three Gates” will be located in what used to be the heart of the neighborhood, near Pinkas synagogue. The project is slated to be finished in 2011. Sarah Borufka has the story.

For the first time in over a century, a small street in Prague’s Josefov neighborhood will be open to the public. Come next year, visitors and Prague residents alike can access Malá Pinkasová street, located in what used to be the Jewish ghetto. The street will be the site of a sculpture project titled “Tři Brány” or “Three Gates.” The author of the project is Aleš Veselý, a world-renowned artist of Czech-Jewish origin.

Seven years ago, Mr. Veselý discussed possible ways of reviving the area around the Pinkas synagogue with the director of the Jewish museum, Leo Pavlát. Now, thanks to an eight million crown contribution to the “Three Gates” budget by the city of Prague, the artist can start working on the sculptures. Aleš Veselý explains the symbolism of his design. 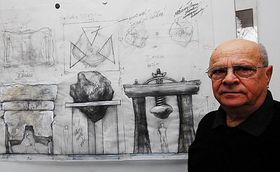 The three gates will stand near the Pinkas synagogue which commemorates the Czech and Moravian Jews who died during World War II. One of the gates will be made from three planes of polished steel. Visitors will pass through the first two.

“But in front of you, there’s the third one, and once inside, you have to pick whether to pass it on the left or right side. It’s supposed to symbolize the experience of a people who have been scattered around the world, living in foreign cultures for a long time, and having to make these choices and decisions everyday, more so than others.”

Another gate will look like a construction of three massive wooden branches. For reasons of preservation, Mr. Veselý chose to have the material cast in bronze rather than using real wood. The third gate is composed of a metal frame, with a large boulder resting atop.

Mr. Veselý has received numerous awards for his work. He designed the Jewish Memorial in Terezín. His sculptures can be found around the world, in Germany, Korea, Lithuania and Japan.

The total cost of the “Three Gates” project amounts to 16 million crowns. Friends and supporters of the famous artist are currently organizing a collection to raise the funds Mr. Veselý is still missing for his project. 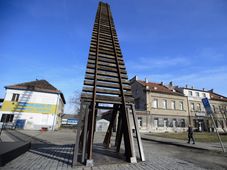 The Bubny Railway Station in Prague, which saw tens of thousands of Czech Jews leave for the ghettoes and Nazi death camps, is set…