Czech tennis player Tomáš Berdych scored an important win at the US Open when he beat world number one Roger Federer in the tournament’s quarterfinal. Berdych, whose play against the Swiss has been described as overwhelmingly powerful, will next play Andy Murray of the UK for a spot in the US Open final. 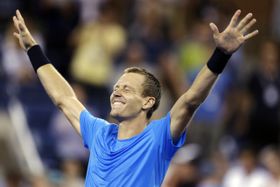 Berdych, who has had a mixed season so far, was not expected to score his fourth victory in his last seven meetings against the top-seeded Swiss. Federer had a better start to the game and was leading Berdych 2:0 and then 3:1. But the Czech, seeded sixth, stepped up and took the first set in a tiebreak. Berdych broke at the start of the second set and Federerer found no weapon against the Czech’s consistent, powerful forehand play.

In the third set, Federer came back, scoring four games in a row against Berdych, and taking the whole set. But the Czech again found his composure in the fourth set; he broke Federer to make it 5:3; he then served an ace to get a match point which he capitalised on with another powerful serve to win the game. The Czech player later told a news conference that things just worked out right for him in the game.

“Everything seemed just right today, and the result reflects what was happening on the court. I don’t think I had any black spot. Of course, I lost the third set and I can hardly expect to beat Roger in straight sets and get into no problems at all.” 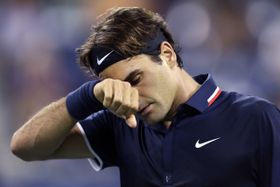 Roger Federer, photo: CTK The trouble came in the third set in which Berdych suddenly became somewhat nervy, and made two double faults. But the 26-year-old Czech said he still knew Federer had a longer way to go.

“I just felt it at the end of the third set when he took the break back and he made another one, and he was really pushing. Then the set was over but he still needed two sets while I just needed one. I was still in a better position, and I knew I needed to keep up with him even if the crowd was on his side and he played well. But I was just trying to stay close. I got a chance, I converted it and finished it off with my serve.”

In the semi-final, Tomáš Berdych will play third seed Andy Murray. The Scot has had a spectacular season so far, having won the London Olympics and reaching the final at Wimbledon. But Berdych says he has full confidence in his own style of play.

“He got the results you mentioned; he won gold at the Olympics, and made it to the final at Wimbledon which probably helps him a lot. But it’s similar to games against Roger. I come up with my game which he might not like that much. I bring something different and that could be my chance.” 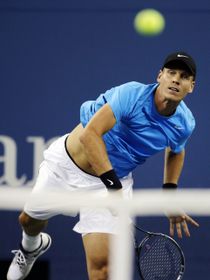 Tomáš Berdych, photo: CTK At the post-match news conference, Tomáš Berdych came out a little edgy when reporters compared his win over Roger Federer to what happened in the second round of this year’s Wimbledon where Czech underdog Lukáš Rosol upset Rafael Nadal. Tomáš Berdych seemed to have taken the question rather personally.

“I just hope you are not comparing me to Lukáš Rosol. You said there was this big upset when Rosol beat Nadal, and then you mentioned my match here. But I don’t think this was such a big upset. And what else can I say? Is it wrong that we are from the Czech Republic and we beat big guys? No? Good. It’s a good thing, yes.”

The semifinal match in which Tomáš Berdych will play Andy Murray for a spot in the US Open final is scheduled for Saturday at 11 AM local time.