Trust in president falls amid series of scandals

Trust in the country’s president, Miloš Zeman, has fallen to its lowest in the past 12 months, a poll - conducted on the heels of Czech-born Holocaust survivor George Brady being overlooked for a state distinction - suggests. Other missteps or scandals since, including the latest involving the outgoing head of protocol at Prague Castle, could negatively impact the numbers further. 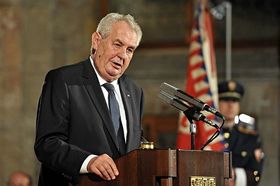 Miloš Zeman, photo: Filip Jandourek For the first time this year, President Miloš Zeman’s ratings leave something to be desired: a poll conducted in November by the CVVM agency released on Monday suggests that more members of public distrust the current head of state, 49 percent, than those who do, 48. That’s a fall eight percentage points from the figure a month earlier.

The president still fares favourably compared to the government, where trust slipped to just 35 percent. But there are indications that scandals are taking a toll: the CVVM poll, for example, was taken not long after Czech-born Holocaust survivor George Brady was passed up for a state honour for which he had apparently been considered. In the background were allegations the decision was taken after Mr Brady’s nephew, Culture Minister Daniel Herman, met with Tibetan spiritual leader the Dalai Lama, earning the president’s wrath – a claim which Prague Castle roundly denied. 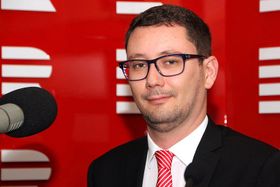 Jiří Ovčáček, photo: Šárka Ševčíková There are other incidents which have potentially hurt the president’s popularity. These include a protracted battle with the niece of the legendary Czech journalist Ferdinand Peroutka, a statement by the president’s spokesman Jiří Ovčáček which slighted the US ambassador to Prague, Andrew Schapiro, suggesting the diplomat had not bothered to attended a ceremony at Prague Castle on October 28 although he had, questions over the relatively cheap purchase of a Prague villa by the president’s chancellor, Vratislav Mynář, and more damaging, the fact that Mr Mynář still lacks security clearance for the job of chancellor although he has been in the post since 2013.

Legal proceedings against artist pranksters who hung a giant pair of red underpants above Prague Castle in 2015 also left a bad taste, and it is lost on no one that at least some voters are turned off by the president’s policies themselves, widely seen as pro-Russian and pro-China, the latter to a slavish degree.

Now questions remain over how damaging to Prague Castle a new scandal, which deepened on Monday, might be, concerning the president’s chief of protocol Jindřich Forejt. 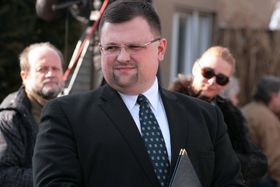 Jindřich Forejt, photo: Martin Strachoň, CC BY-SA 3.0 Last Friday, there were reports that the well-known official, once slated for the post of ambassador to the Vatican, would be leaving his post within a matter of days but it grew clearer only this week why. On Monday, the investigative independent news site HlidacíPes.org released several screenshots of Mr Forejt, 39, in which he appeared to be snorting an unknown white substance. HlidacíPes made clear it would not be releasing the video itself, which sources reported also showed the head of protocol involved in sex games. Whether the rest of the material is released eventually is an open question, but at the very least the sight of Mr Forejt snorting an unknown substance will require some explanation. Prague Castle has not commented in any great detail but shortly before noon on Tuesday it was revealed that Mr Forejt will step down on December 31, citing personal and health reasons. His resignation, the president’s spokesman Jiří Ovčáček confirmed, had been accepted.