UK village to finally get monument to Anthropoid heroes

Prior to being dropped in Nazi-controlled Bohemia to carry out the assassination of German governor Reinhard Heydrich, the Czechoslovak parachutists Jozef Gabčík and Jan Kubiš were based in the English village of Ightfield, where they befriended the local Ellison family. Now – 75 years after their daring mission – the pair are set to get a monument there. The man behind the campaign to honour them in this way is Englishman John Martin, the author of a book on Operation Anthropoid.

John Martin, photo: archive of John Martin “For years I’ve thought that something should be in the village for people to know about what went on, about the history.

“I remember when I first went to the village, when I was doing research for my book, no-one in the area knew anything at all about Gabčík and Kubiš.

“They’d never heard of them, and there was certainly no memorial stone. It was very difficult to find any information.

“I thought that was a real oversight and I set about trying to get some kind of historical, official recognition of Gabčík and Kubiš in this village.

“I just went against obstacle after obstacle – politicians and planners and all sorts of things. This has gone on for about two or three years now. I’ve had to attend all kinds of meetings.

“But eventually, I’ve only just heard, we’ve now got official confirmation that a memorial stone will be placed in the village of Ightfield to Gabčík and Kubiš – and it’s just fantastic news.”

Congratulations on getting that done. What will the memorial stone actually say?

“Rather than just about the history of Gabčík and Kubiš I tried to get it so that it represents the history, and so it will actually say: This stone has been placed in recognition of the friendship and support given by the Ellison family to Czechoslovak soldiers Jozef Gabčík and Jan Kubiš in 1941. The soldiers gave their lives to freedom in the aftermath of Operation Anthropoid in Prague, 1942. Jan Kubiš, Jozef Gabčík, photo: Public Domain “Just before they were flown out Jan Kubiš gave a handwritten note to the Ellison family and I thought it would be nice if we incorporated this.

“And the note says: Remember please your Czechoslovak friends who will never forget the nice time spent with you.

“I’ve also included that. That will be engraved on the stone.

“So yes, we’re there. We haven’t got the stone yet. I’m still trying to raise the money for it. I’m about 200 pounds short at the moment.”

And how can people contact you, if they want to make a donation to this?

“They can always contact me via Facebook. My book is called The Mirror Caught the Sun, because that was one of the signals that Heydrich’s car was approaching – a small hand mirror to catch the rays of the sun.

“This is what people are donating small amounts to: five pounds, this kind of thing.

“We’re going to get this big stone and it will all be engraved. And it will be there for the next 100 years or more.

“In future generations, when we’ve long gone, people will still be visiting this stone and will still be remembering the bravery of Jan Kubiš and Jozef Gabčík, and of course Operation Antrhopoid in Prague.” Just over 75 years after their deaths, Sunday will see the unveiling of a monument to the Operation Anthropoid heroes Jan Kubiš and… 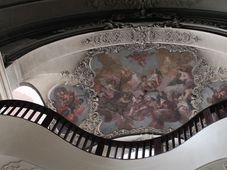 Last days: The heroes of Operation Anthropoid at Prague’s Cyril and Methodius Church

Seventy-five years ago, on May 27, 1942, Czechoslovak parachutists dropped into Bohemia carried out one of the most daring actions…