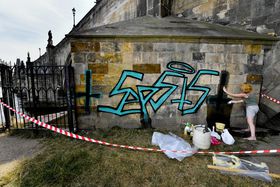 Photo: ČTK/Vít Šimánek Charles Bridge, one of Prague’s top tourist attractions, was vandalised about two weeks ago by two German nationals, who spray-painted a five by two meters logo on the stone bridge support. A local resident saw them in action and called the police. The tourists were fined 100,000 crowns each and expelled from the country for the next five years.

Due to the size of the graffiti, the clean-up works on the medieval bridge had to be approved by experts from the National Heritage Institute. The head of the institute, Ondřej Šefců, announced beforehand that the process would be very complicated and would last at least until mid-August:

“The stones, especially the oldest gothic ones, are very porous, and it will be very difficult, maybe even impossible to clean them so that there are no traces of the graffiti left on the wall.”

A restorer started removing the paint on Saturday morning, using a brush and a special chemical solution, says Barbora Lišková, spokeswoman for the city-owned company Pražské služby, which is in charge of the city’s waste management:

“On Saturday morning the restorer started to remove the graffiti and had been working on it until about five o’clock in the afternoon, planning to resume his work on Sunday morning. However, when he arrived on the spot, he discovered that the graffiti was gone.”

According to experts from the National Heritage Institute the cleaning was done inexpertly, with traces of paint being left on the stones. But architect and restorer Jan Bárta of the Club for Old Prague, who also inspected the site, says the work seems quite professional at first sight: 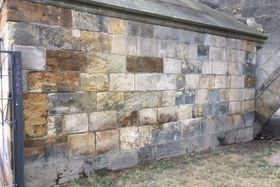 Photo: archive of TSK “I think someone wanted to prove that the graffiti could be removed overnight and that the clean-up works didn’t have to take two weeks. My first impression is that they knew what they were doing.

“On the other hand, it is clear they must have used a huge amount of water to remove the paint, so a question remains what solution they used and whether traces of it haven’t remained in the stones, creating some further damage in the future.

“Charles Bridge is a national cultural monument. It cannot be vandalised but it also cannot be cleaned without permission. So I think it was a mistake and it should have been done properly.”

The incident is not the first time Charles Bridge was vandalised. In 2017, two foreign tourists were expelled after writing in Arabic on a statue of St. Francis on the bridge, while a year earlier, two French tourists spray-painted white lettering on the wall of the bridge. The Lennon Wall, located in a secluded square in Malá Strana near the French embassy, had long been a traditional place where anybody…