Unconventional production of Faust by theatre for Prague's homeless

Productions of Faust are not hard to come by in Prague. It is a staple of the city's black light theatres, and posters advertising a high-profile production of the play earlier this summer can still be seen all over the town. But, on Wednesday night a production of the play with a difference was premiered. Rosie Johnston has the details: 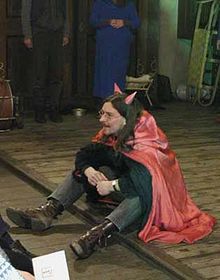 Jakub Balaban, photo: Jezek & Cizek theatre Wednesday evening's Faust premiere was staged in the most unusual of settings. While outdoor theatre is not uncommon in this part of the world, this is the first time I've seen a play set in a disused reservoir. And the troupe staging the play was equally as unconventional. The performance was a joint-effort staged by Majak theatre group, and Jezek and Cizek, whose members are all either currently homeless, or who have lived on the streets in the past. Jakub Balaban is the director of the Jezek and Cizek theatre group: 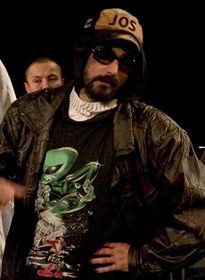 Karel Lampa, photo: www.jezekacizek.cz "One of our fundamental ideas is combining different worlds, and different circles of people. For example, we have homeless people working with both professional artists and amateur artists in an auditorium with an underground rock band. And together it works."

Karel Lampa has been with Jezek and Cizek for three years. In Wednesday's performance he played both a foppish German count, and a floozy at a party. He told me what originally attracted him to the group, and how the cooperation with Majak had turned out:

"Theatre is great because you can transform yourself into whatever you want to be, and you can bring your own experience to the role. In our theatre, most of the actors have spent most of their lives on the move, so they have never had any formal schooling in acting. They are from the streets. So, this means when we play, it is more entertaining, more lively, and more interesting for both professional actors to work alongside, and for the general public to watch than say, the same play being performed by professionals."

Jakub Capka is from the Majak theatre group. He played the devil in this production and he directed it too. I asked him the way in which previous versions of Faust had influenced his own:

"While we were coming up with the script for this production, because we wrote it by ourselves as well, we tried different approaches to script-writing. We tried studying lots of different interpretations of Faust to see how it had been done in the past. We looked at the 'greats'. And in the end we said, 'Alright, stop!' We want to create our own theatre so, in the end, we forgot about all of these past plays and tried to remember our first childhood memories of temptation and the problems that Faust confronts. We wanted to bring our own childhood into it." 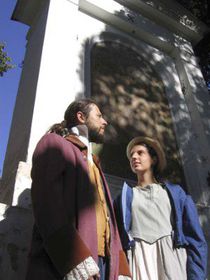 Faust, photo: www.jezekacizek.cz Projections, video-clips and live music from indie-rock band The New Kids Underground all accompanied the performance. Most of the action was played out on the edge of a large pit in the ground, and sometimes in the middle of the audience. The old reservoir served as Faust's laboratory, and later felt a bit more like a cell. The play was, as you have already heard, all in Czech, but with all of these sons et lumieres it would prove interesting for someone currently learning the language too. It was definitely a hit with the audience on Wednesday night:

"I love the scene, the atmosphere, the lights and the costumes. It was great."

"I think it was very nice, very interesting of course, because of the location - it's a very special place. It is not at all usual to use this place for art. It's a really, really cool idea I think."

"I think the best thing about this play was the music, without a doubt. The New Kids Underground are great! And as for the actors - well definitely Jakub, who played Mephistopheles, it was perfect." 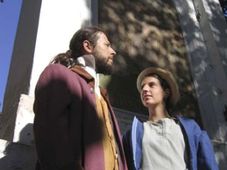 Czechs and Faust: A continuing affair

The story of Faust, the doctor who makes a pact with the devil in his pursuit of knowledge, has captured the imagination of some of…

Petr Sourek - artistic director of theatre for the homeless

Theatre helping Prague's homeless get back on their feet

Under communism it was practically impossible to be homeless in this country. Since the 1989 revolution that has changed dramatically,…