Final preparations are underway for this year’s edition of the weeklong Prague Pride festival of LGBT culture, which starts on Monday. Over 100 events are planned for the seventh edition of one of the biggest festivals of its kind in the region. This year the organisers of Prague Pride say they will place a special emphasis on the human rights of LGBT people in repressive Eastern states such as Chechnya and Armenia. Spokesperson Bohdana Rambousková told me more. 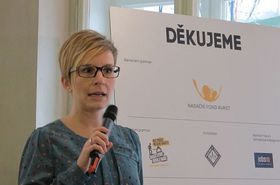 “It’s an organisation helping gays fleeing from Chechnya and seeking refuge in Moscow.

“Unfortunately, we won’t have any Chechen people here, but we will have Boris Dittrich, who is an LGBT activist and LGBT advocacy director at Human Rights Watch.

“We will also have Zakir Magomedov, who is a journalist and activist, and they will be talking at a round table about the current situation.”

Is there a kind of regional aspect to Prague Pride? The idea that you’re not only for Prague and the rest of the country, but also maybe to some degree for other countries east of here? 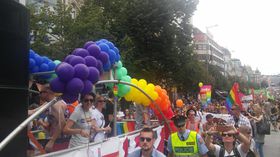 “Prague Pride takes place in a kind of tolerant country where we don’t need to fight with our opponents in the streets. The participants in Prague Pride are, let’s say, safe here.

“Therefore, we think that it is important to not only talk about the situation in the Czech Republic but also to stand up for other countries to the east of us.

“So each year we select some countries where recent developments are not very good. 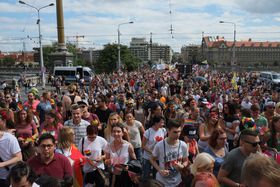 Prague Pride, photo: Petr Vilgus. CC BY-SA 4.0 “We want to open a discussion, to inform people and to at least symbolically support LGBT people living there.”

We’ve been speaking about the serious side of Pride – what are some of the more fun events that will be taking place next week?

“All together we’ve prepared 104 events.

“We will again have Pride Village, which is on Střelecký Island and will have a programme every single day.

“Pride Village is open to absolutely everyone. 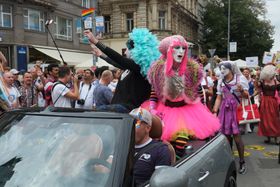 Prague Pride, photo: Petr Vilgus. CC BY-SA 4.0 “It’s not focused only on the LGBT community – it’s meant to be a meeting point of the Czech LGBT community and the majority society, where they can meet, get to know each other and to discuss several topics.”

I presume most of your participants are based here in the Czech Republic. But do you get many people travelling to Prague for the Pride festival?

“Each year we get three or four thousand coming from abroad.

“Very often they are from Slovakia or Poland, because, as I said, Prague is a very safe city, gays and lesbians are welcomed here.

“It’s not a problem to walk in the streets here and you can feel really safe.

“But we also have people coming from Western countries, because Prague Pride has an atmosphere of, let’s say, a former communist country and a modern, contemporary democracy.