Observers are calling it one of the worst incidents of hooliganism by fans in Czech football history, a rampage that marred what should have been a classic contest between Slavia and Sparta, Prague’s most famous football clubs. The match itself ended in a 1:1 draw, changing little the top of the table - but it was vandalism and violence by radical fans, including the tearing out of hundreds of seats at Strahov’s Evžen Rosický Stadium, that captured all of the headlines. Damages have totalled at least half a million crowns. 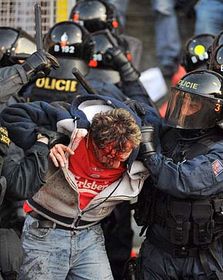 Photo: CTK Monday’s football derby was the 267th match-up between traditional rivals Sparta and Slavia but it is one that will be remembered not for finesse on the pitch but for some of the worst behaviour by hardcore fans. Skirmishes broke out between rowdies and police in riot gear even before fans were let in to the stadium, with firecrackers and other objects thrown, leading police to twice charge. Eventually the fans were all admitted, but the bad behaviour continued inside. Horst Strnad is a football specialist for the Czech daily “Sport”:

“I think it was the worst derby in the history of matches between Slavia and Sparta, a lot of explosions in the stadium and a very bad message to all football fans.” 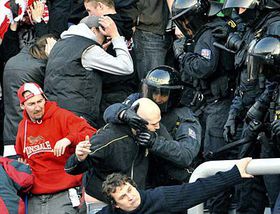 Photo: CTK The second half of the game saw increasing problems among rowdies on both sides. Flares and firecrackers were set off, and increasingly seats were torn from their moorings as the teams played to a draw. Fire hoses were used to put out flares and flags burning in the stands and riot police rushed in en masse to quell the most aggressive in the rowdies’ corners. Why are hardcore fans allowed to get away with it? According to Horst Strnad, the main problem lies in weak legislation. As it stands, anyone tearing out a seat at a stadium risks getting only a 1,000-crown - roughly 60 US dollar - fine for a misdemeanour, rather than more serious punishment. Repeat and violent offenders, say specialists, should receive bans from attending stadiums or even local towns on game days, as in Britain or Germany. Horst Strnad again: 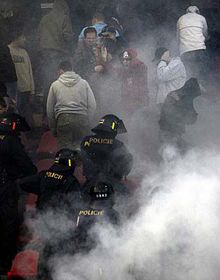 Photo: CTK “I think that teams’ management are doing their best but the problem is in Czech legislation. We need similar laws like in Great Britain. The problem in the Czech Republic is widespread, in Ostrava and Brno – not just between Slavia and Sparta like in this week’s derby.”

So far, tougher legislation has not been favoured: on the contrary the Interior Minister Ivan Langer told Mladá fronta Dnes that it wasn’t even needed, stressing the responsibility lay with the clubs and club security and not the police. If the minister has his way as part of cost-cutting measures police will no longer intervene inside stadiums at all in the future but only monitor developments outside. As for the damages from the Sparta-Slavia game on Monday they stand at half a million crowns, the equivalent of around 30 thousand US dollars. The final toll: 26 arrests (two for fighting with police), two injured as well of course as a ruined match.