Thirty years ago, on April 24th, 1978, seventeen Czechoslovak citizens got together and decided to form an organisation called VONS – the Committee for the Defence of the Unjustly Prosecuted. The organisation’s aim was to monitor and publicise cases of people unlawfully prosecuted by the Communist regime. Within a year, five VONS members – including Václav Havel, Petr Uhl and Jiří Dienstbier – had themselves been sent to prison, an act that received worldwide condemnation. On Tuesday former VONS members gathered for a seminar at the Senate to mark the organisation’s 30th anniversary. They included original member Jaroslav Suk, who was forced into exile in 1981 and now lives in Sweden: 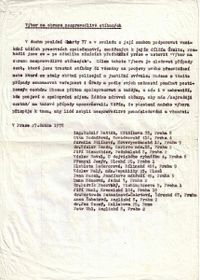 The founding declaration of VONS “You must know what a totalitarian regime is. It’s very complicated to explain to somebody who lives in a democratic country: The total registration of all citizens, the monopoly of information, police brutality and so on. You could say that the Chilean regime of Pinochet was brutal, but not as totalitarian as it was here. When the system is established, you have very little brutality. It’s about total control.”

What do you think VONS achieved?

“They broke the monopoly of information that the regime had. I think the most important thing was that [after VONS], nobody could say ‘I didn’t know’, as many Nazis could say. Many people who were in prison – their destiny was a little better. But mostly it was about breaking the information monopoly.”

What are you feelings now, 30 years since this organisation was founded?

“It’s of course very nice to meet all these old friends and to remember it. I’m very glad it’s happening here in the Senate, that they have a human dimension, not only political intrigues, but to know that the very ground of democracy is the activity of everybody.”

Do you think there is enough interest in what you and Václav Havel and Jiří Dienstbier and the other VONS members did 30 years ago?

“It’s history, of course. It’s the same as in Great Britain – they remember their air force and so on. It’s part of history, and it’s very important to remember. As Václav Havel said today – continuity is part of identity. We must know what happened in history to know who we are.”