What’s behind summer of unprecedented spending in Czech soccer?

The new season in Czech football kicks off this weekend and anticipation is exceptionally high. Titleholders Slavia Prague and their main rivals Viktoria Plzeň and Sparta Prague have all spent an unprecedented amount on new players, including seasoned internationals from Portugal, Israel and Turkey, with Slavia and Plzeň hoping for an immediate return in the form of qualification for this season’s Champions League. But why are the top Czech clubs flashing the cash just now? That’s a question I put to soccer journalist Karel Häring. 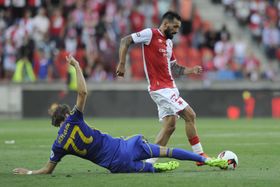 Slavia Prague's new player Danny (right), photo: CTK “I think the main reason comes back to Slavia Prague. Because since the Chinese owners came to Slavia, they invested money in the squad.

“After winning the title they knew that they needed a stronger squad if they are to go through to the group stage [of the Champions League].

“And when you look at Sparta Prague and their results in recent years, it was a very unsuccessful spell for them, so they had to react to the spending of Slavia.”

Is it also a factor that the winner of the new season may qualify directly for the group stage of the Champions League next year?

“Definitely it’s one of the main reasons, because how many Czech clubs have played in the Champions League in recent years? Only Viktoria Plzeň, twice.

“The bonuses that are guaranteed for getting into the group stage make it a very, very interesting target for Slavia, Sparta and Plzeň.”

What has been the reaction of fans to the news that the big clubs are making big signings? I presume they’re looking forward to seeing more foreign players, including some who are quite well known?

“I think in general, from what I’ve seen on Twitter and in articles, they are looking forward to the new season more than in the past. 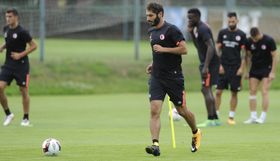 Halil Altintop (Sparta Prague), photo: CTK “Because it’s really unusual – I don’t remember such a big spending spree in many, many years.

“So I think there is excitement from the fans.”

Is there any negative side, or any danger, do you think, to all this big spending on the part of the major Czech clubs?

“Some people say there will be less space for younger players, which is obvious.

“Or they say it could have a negative effect on the national team, because some players like, let’s say, [Sparta’s] Josef Šural could spend more time on the bench.

“But I don’t think it’s very negative for young players.

“I remember Slavia Prague in the first half of the 1990s, when there were guys like Vladimír Šmicer and Patrik Berger. 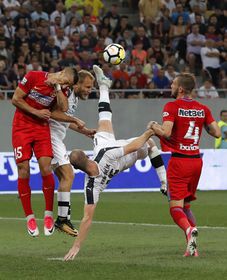 Steaua Bucharest - Viktoria Plzeň, photo: CTK “Slavia were very strong, but these guys had to show really good quality to make it to the first team. So I think competition is a good thing.

“What I think could be negative is if, let’s say, the project at Sparta fails – then it could really take one or two years to repair.”

Which club has made the best signings, do you think?

“We’re only talking about Slavia and Sparta, but Viktoria Plzeň also made very interesting signings and they didn’t make so many changes.

“Sometimes that’s better than to sign 10 or 11 players [as Sparta have done].

“Sparta will need at least three or four, maybe more, months to settle in all their new players.

“So for me Viktoria Plzeň was clever on the market. And second: Slavia Prague.”