Why did Communists allow first public demonstration on December 10, 1988?

Monday is the 30th anniversary of the first demonstration ever permitted by Czechoslovakia’s Communists. But why did the regime allow their enemies like Václav Havel to speak publicly on December 10, 1988? And what did it mean for dissidents themselves? 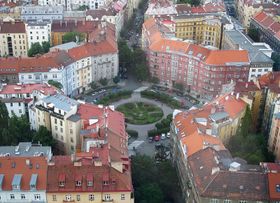 Škroupovo náměstí in Prague’s Žižkov, photo: Huhulenik, CC BY 3.0 Historian Petr Blažek says there were a number of reasons the regime allowed the event, organised by Charter 77 and several other groups on Human Rights Day.

And, says Blažek, the Communists thought it might be better if the opposition let off steam well away from the city centre.

“The idea of a kind of Hyde Park where dissidents could speak without being very visible, ideally on the outskirts, was discussed at the Central Committee on December 2. The organisers applied to hold a gathering on Wenceslas Square. That was rejected – but they were told by the Prague party committee that it could happen elsewhere.”

The first speaker to address the crowd was Václav Havel.

“It seems we live in tense and notable, if not dramatic, times. On one hand, the authorities are intensifying repression. They are arresting freely acting citizens and turning water cannon on them. On the other, society is starting to throw off the yoke of fear, and increasing numbers are daring to express their real opinions. It’s hard to tell what will happen next.” 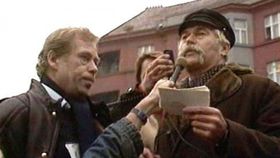 “He came across as quite shy and it wasn’t that convincing. But on the other hand, the very fact he could speak in Prague at a public meeting for the first time in 20 years or so was of course a major change.”

The historian says an estimated 2,000 or 3,000 turned up for the gathering. Some regime opponents had stayed away out of fear of the usual riot police violence. Others only heard about the hastily agreed event when it was over.

In any case the demonstration on Škroupovo náměstí was the last permitted by the Communists before their regime fell asunder less than a year later.

“The comrades on the Prague committee and even the party leadership got lots of angry letters from local party offices in Prague 3, asking how such a gathering had received a permit. I think that’s one reason that official commemorations were not allowed on the 20th anniversary of the self-immolation of Jan Palach [in January 1989].”