Will Czech foods lose their place-specific names on accession to the EU?

As in any other country, there are several foods and dishes which are peculiar to the Czech Republic. As the country prepares to join the European Union in a couple of years, many people are afraid of losing some specialities of Czech cuisine which do not measure up to EU regulations. Further problems are caused by the fact that the names of some Czech foods - such as Znojmo cucumbers - include place names. Such place names are allowed, but they have to be registered. Alena Skodova reports:

Earlier this week, Czech negotiators left for Brussels with a list of foods - and some drinks - whose names refer to particular places in the Czech Republic. All of these distinctive foods are only made in one place in the country. Examples include olomoucke tvaruzky which is a strong smelling cheese produced in the north Moravian city of Olomouc. Indeed, olomoucke tvaruzky smells so strongly that some people prefer to have it in the pub - you can eat it at home of course but the smell will linger for hours. Other examples of place-specific products include several brands of beer like Smichov beer, Pardubice gingerbread and Trebon carp, which many people have for their Christmas dinner.

Regulations regarding place-specific products were only introduced by the European Union in 1992 and - ten years later - it is not yet clear how the EU will treat new members in this respect. The whole matter is quite confusing and some people - and food and drink producers - may be feeling some trepidation ahead of EU accession. Will they lose their beloved Karlovy Vary wafers or Vodnany duck? Jan Finferle from the Czech Foreign Ministry's department for coordination of relation with EU says there's no reason to be afraid: 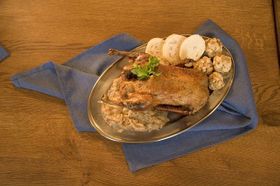 Photo: CzechTourism "There is a number of trade marks that have been protected on the European market, that is famous European trade marks which are protected on the single market, and the same rules will apply to the Czech Republic, as well as standards as it is normal within the EU single market. So it's a normal procedure and there's no reason to be afraid or to call alarm so to say in this respect. It's normal negotiations and the Czech Republic will benefit from its EU membership also in this field because the Czech products will be more protected."

Will they be more competitive as well?

"Well, some of them... We hope that they must be competitive because their participation on the single market proves their ability to be competitive and I believe that if famous Czech products have been competitive up to now, there's no reason to be afraid that they will not be competitive also after our accession. There's a strong belief that that this competitiveness will continue also in the EU."