Will Mucha’s gigantic Slav Epic be shown in Japanese museum?

Japanese promoters have expressed interest in bringing to Japan one of the most grandiose pieces in the history of Czech art, Alphonse Mucha’s Slav Epic. They are even offering to finance the restoration of the monumental, which consists of 20 huge canvasses. But both the city of Prague, which owns the work, and Mucha’s grandson are hesitant to let it travel so far.

Alphonse Mucha’s Art Noveau paintings are among the Czech nation’s best known and most recognizable art. His most ambitious work was the Slav Epic, a 20-piece series of huge canvasses depicting the history of the Slav peoples. In 1928 Mucha donated the Slav Epic to Prague, on the condition that the city’s authorities house it in an appropriate space. However, some 80 years that has not happened and it is still on display in the town of Moravský Krumlov.

Now one of Japan’s biggest cultural promoters, NHK Promotions, is interested in bringing the piece to a prestigious Tokyo museum in 2012, and has offered to finance its restoration. But sending the huge artwork on a journey of thousands of kilometers may prove difficult, says Milan Bufka, director of the Prague municipal gallery.

“We have a contract with a restorer to restore the entire 20-piece series. One of the conditions attached to possibly lending the painting out is that everything would have to be supervised by him. As far as insurance costs go, that could amount to tens of millions of euros.”

The final decision on the matter will be made by Prague Town Hall. Councillor Ondřej Pecha is in charge of cultural affairs.

“At this moment, we are gathering all the necessary documents to be able to discuss this, such as insurance contracts. Then the city council will debate the question of if and how this could happen, and other details.”

Meanwhile, the artist’s grandson John Mucha has expressed fears that the work could be damaged in transit and that possible success in Japan could turn his grandfather’s epic into a “circus attraction traveling the world.” 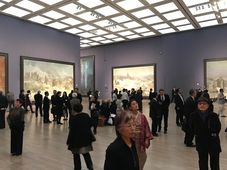 Alphonse Mucha’s cycle of paintings the Slav Epic has gone on display in the Japanese capital Tokyo. The exhibition is part of a Year…