Work of the first Bohemian printers on display in National Library

The National Library is currently holding a special exhibit of the work of the first printing press in Bohemia. The seven original works made by anonymous printers in Plzeň in the late 15th century have been out of the public eye for 34 years. Foremost among them is the Trojan Chronicle, which for more than a hundred years has been at the centre of debate over when Czechs first began printing. 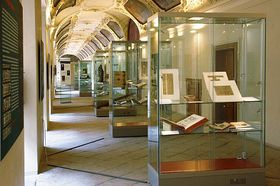 Photo: Eva Hodíková, www.nkp.cz The name of the “Mysteries of the Trojan Chronicle” exhibition at the National Library refers to what is often considered the first book printed in Bohemia, a tale of the Trojan War bearing the date 1468. If, as is often assumed, that means the year in which it was printed, it would be the first printed work in the Czech lands. But the curator of the exhibition Kamil Boudal says the aim of the exhibit is to dispel myths rather than ponder mysteries.

“The older generation, namely that of the National Revival, claimed that the date in the book is real and that book printing in Bohemia began in 1468. That would make Czechs the second nation to know the secret of Gutenberg’s invention. That would be nice. But in the second half of the 20th century a new generation wanted to correct this error, and they wrote a series of articles to prove that printing began here in 1476, and that the first printed work was the Statutes of the first archbishop of Prague.”

Convincing as these arguments were, counter-theories persist to this day in publications of all kinds. The National Museum has therefore tried to set the record straight using watermarks in the paper that can date with relative precision.

“The watermark tests have shown that the Trojan Chronicle is truly from the mid-1480s, like all of the early Czech prints. Basically, book printing began in the Czech lands around 1476. They first printed in Latin, and only later were Czech titles printed.”

The exhibition only begins with the mystery of the Trojan Chronicle. It includes a wide range of other work from the era aimed at presenting the changes that printing brought towards the end of the Middle Ages. On display at the National Library are also some of the first prints made in other countries, fragments of Gutenberg’s own originals, as well as some of the wooden tools used for illustration that predated Gutenberg, and upon which he innovated. 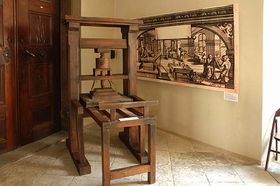 Photo: Eva Hodíková, www.nkp.cz “We want to show visitors who haven’t seen these early prints what the first books looked like. So we are displaying many handwritten manuscripts from the day to show, not how different early books were, but how similar they were to handwritten manuscripts. So we show the handwritten versions of the oldest printed works and we talk about their contents. We have taken a lot of books out of repository in order to show people the book culture of the second half of the 15th century.”

The Mysteries of the Trojan Chronicle exhibit will be on display until the end of May.