The Czech football team are on their way home from the World Cup in Germany, after going out in the group stage. There was great optimism here in the Czech Republic when they beat the USA in their opening game. Surely, people thought, they cannot fail to qualify for the knock-out stages. But fail they did, after losing to Ghana, and then being beaten by Italy in their final group game in Hamburg on Thursday afternoon. Where did it all go wrong for the Czech Republic? Pavel Nedved, photo: CTK After a great 3:0 victory over the United States in their opening Group E match the future looked bright for the Czech Republic, and expectations of Pavel Nedved and Co reaching the knock-out stages were running high.

But things started going wrong for the Czech Republic in the second game, against Ghana. A goal conceded after less than 90 seconds clearly took the wind out of their sails, and they went on to give their direst performance in a very long time. Already missing strikers Milan Baros and Jan Koller, the real knockout blow for the Czechs came with the sending off of Tomas Ujfalusi with over 20 minutes to go.

Baros was back, but clearly unfit, in the life-or-death game against Italy on Thursday. The experienced Italians went ahead against the run of play mid-way through the first half, though the Czechs were playing quite well and were still in with a fighting chance. Until, that is, Jan Polak got sent off for a second yellow card just before half-time. A ten-man Czech team just did not have it in them to overhaul the Italians. 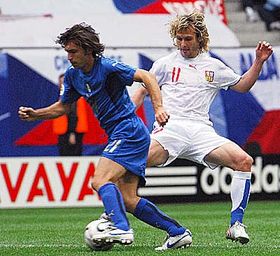 Photo: CTK The Czech manager Karel Bruckner spoke after Thursday's game and was clearly angry about the players' lack of discipline.

"We lost some key players - four strikers, Ujfalusi, Galasek. And we didn't deal with frees and corners like we should have. As for the fouls, the penalty against Ghana and the sendings off - for me they were completely unacceptable and incomprehensible. Several times we warned the players, even in writing...You can't turn a game around with only ten players, especially against the likes of Italy - I can't do that."

One of the best Czech players at the World Cup was goalkeeper Petr Cech, who was particularly brilliant in the match against Ghana. He had this to say about the two countries who qualified from Group E. 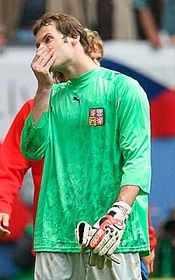 Petr Cech, photo: CTK Petr Cech is just 24 and is extremely likely to be a fixture in the Czech team for many years to come. But I think we can expect some changes after the World Cup. It is not very likely that any of the "silver generation" who reached the final of Euro 96 - specifically Pavel Nedved, Vladimir Smicer and Karel Poborsky - will appear in a Czech shirt again, and other older players who broke into the team later in their careers (like Tomas Galasek) could well be past their international sell-by date.

Can the Czech Republic find adequate replacements? Perhaps, but relative youngsters like Jaroslav Plasil still need to improve considerably at international level if the team is to achieve success in the next few years.