The Czech international football goalkeeper Petr Cech has just been named the best goalkeeper in the world by the International Federation of Football History and Statistics. Cech, who plays for English mega-club Chelsea, has won that accolade at just 23 years of age. 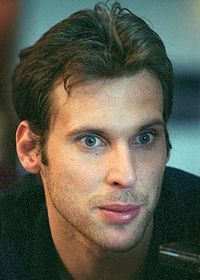 Petr Cech, photo: CTK The International Federation of Football History and Statistics may have an obscure sounding name, but its annual vote to decide the world's best goalkeeper is regarded as authoritative.

The most remarkable thing about Petr Cech winning the 2005 award is that he is only 23 - goalkeepers generally peak later than other players, and most don't reach the top of their game until their 30s.

But Petr Cech is very mature for his age, something which has often been remarked upon since his career began at hometown club Viktoria Plzen. After impressing at leading Czech side Sparta Prague, he wisely joined a relatively small foreign club, French league side Rennes - he knew at 19 he wouldn't have played regularly for any of Europe's big teams.

After two years at Rennes, Cech made the step up to the big league in style, joining English Premier League club Chelsea, famous of course for being funded by Russian billionaire Roman Abramovich.

On the back of being named goalkeeper of the tournament at Euro 2004 in Portugal, Cech immediately established himself as first choice goalie at Chelsea. In his debut season he set a number of records, including for minutes gone without conceding a goal, as the club won the English league title for the first time in half a century.

He became world famous in his first season at Chelsea, and with the club looking likely to dominate English football for seasons to come, the sky is the limit for Petr Cech, who was also this week named in UEFA's European "team of the year".

And with 38 international caps already at the age of 23, the brilliant young goalkeeper is likely, barring serious injury, to represent the Czech Republic a record number of times.