Prague’s new mayor will be the Pirate Party’s, Zdeněk Hřib. The announcement came on Thursday at a press conference held by the three coalition partners that have agreed to lead the Czech capital for the next four years. 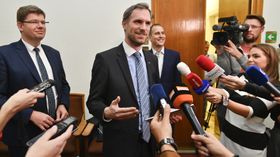 Zdeněk Hřib, photo: ČTK/Michal Kamaryt Almost three weeks after the elections, the coalition talks deciding who will lead the Czech capital have been concluded. Aside from the Pirate Party, the independent movement Praha Sobě and the coalition made up of Top 09, the Party of Mayors and Independents, and the Christian Democrats, known as Joint Forces for Prague will be represented in the City Hall Council.

The coalition will be led by the head of Prague’s Pirate Party, Zdeněk Hřib. The 37-year-old has dedicated most of his professional life to the implementation of IT methods in the health sector. He has been a member of the Pirate Party since 2013 and became the leader of its Prague candidate list ahead of the communal elections earlier this year.

Political scientist Jiří Pehe shared his thoughts on the coalition.

“The capital has not been managed well in the past four years and the parties that have formed this new coalition have not been managing Prague in the past, with the exception of TOP 09, which is one of the smaller components of this coalition. I think it is a gust of fresh wind and hopefully this will move things forward.”

One of the reasons behind the long negotiations was the condition the Pirates set out that the leader of the coalition parties would only be allowed to hold one elected function. Furthermore, the leader of Praha Sobě, Prague 7’s charismatic mayor Jan Čižinský, also had ambitions to become the City Council’s top executive, appealing to the fact that he had received the highest number of preferential votes.

In the end however, both he and Jiří Pospíšil, the leader of Joint Forces for Prague, agreed to stay out of the council, although remaining as leaders of their respective groups within the city’s assembly, giving them a lot of potential influence.

Speaking to Radio Prague on Friday, Mr. Hřib, shared his feelings about the agreement.

“All of the parties have accepted the agreement and I think I can say that the Pirates have been successful in this respect. We managed to secure those responsibilities within the council that we really wanted. That means IT, public administration transparency, housing, science and more.”

The soon-to-be mayor also shared his vision for the future of IT in the city’s administration.

“First we are going to focus on ridding the city of its dependence on a limited amount of IT suppliers; this will lead to the lowering of expenses and greater effectivity. We also want to centralise data sharing within the magistrate and make it easier for people to sort out their paperwork online.”