The sculptures of babies gracing one of Prague’s dominant landmarks, the Žižkov TV Tower, are coming down for maintenance. The fiberglass babies, which helped to improve the public perception of the once-hated tower, are now sixteen and in need of renovation. 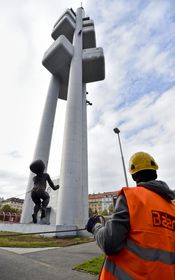 Photo: CTK Onlookers grouped around Prague’s tallest tower crane their necks as they watch high-rise workmen struggle with the gruelling task of cutting off one baby after another from the body of the Žižkov tower and carefully lowering the 120 kilogram sculptures down to the ground.

The babies, as they are known, were installed in the year 2,000 within the project Prague-European City of Culture. A year later they returned as a permanent installation and gradually helped soften the perception of the once-hated tower which people had nicknamed “Baikonur” and “Jakeš’ warning finger” –references to the Kazakhstan cosmodrome and the last leader of communist Czechoslovakia.

Michal Zelenka, the tower’s administrator says the babies by contemporary artist David Černy did the tower a great service.

“I think the artwork made the tower more human. It looks much better with the babies; before it was just a grey, non-descript tower.“

Among the people watching the workmen bring down the black babies is their maker –artist David Černý who has a number of provocative works around Prague including a statue of St. Wenceslas riding a dead horse in Lucerna Passage and a statue of Sigmund Freud hanging by one hand in Prague’s Old Town. He says he is curious to see how the sculptures withstood the test of time.

“Of course, they will all get a new coat of paint, but that’s not the main concern, what we really need to know is what the inner construction of the statues now looks like.“ 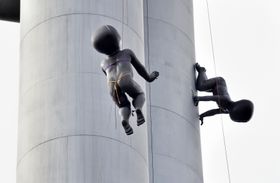 Photo: CTK The reconstruction work on the ten statues is expected to cost around one million crowns and the expenditures will be covered by Czech Radio and Telecommunications which owns the tower. How long the procedure may take depends on the extent of the work that will need to be done.

According to the head of the Radio and Telecommunications authority Martin Gebauer the babies should be back in the spring of next year, at the latest. Whether they will be back in their original place or whether the artist will decide to move them round a bit is not clear. 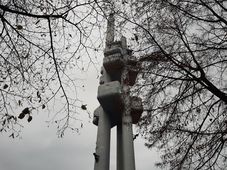 The Žižkov TV tower –one of Prague’s main landmarks

Standing at a height of 216 metres the Žižkov TV tower is hard to miss. Designed by architect Václav Aulický the tower, housing a transmitter…