For the vast majority of Czechs Christmas would not be Christmas without the traditional Czech Christmas dish – carp fried in breadcrumbs and potato salad. The process of getting it to the dinner table for a nation of over 10 million presents a serious challenge for the country’s fisheries. 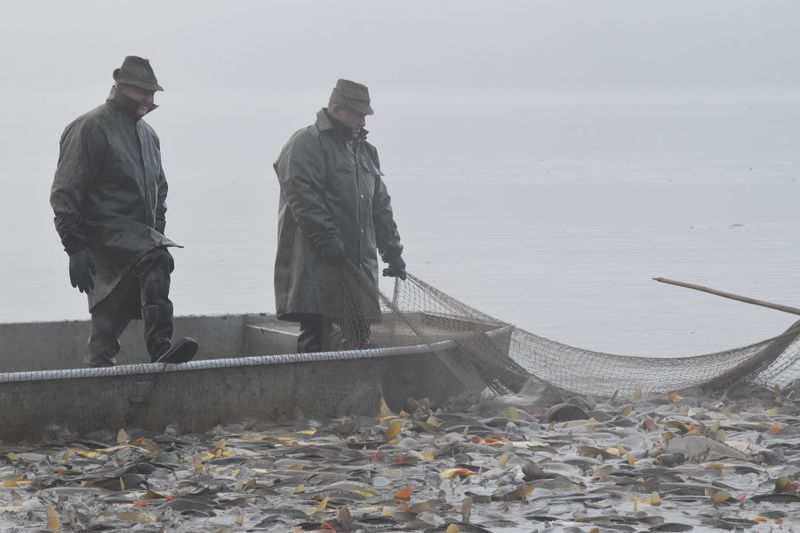 Krčín pond, photo: Ondřej Tomšů The home-bred carp, raised in fishponds in South Bohemia has an important role in weaving the magic of Czech Christmas. In the run-up to Christmas it appears in large vats in Czech towns and cities from which it is sold live, to be killed and skinned on request – or taken home to occupy the bathtub until Christmas night to the delight of many children. Some families have their own Christmas tradition of going to the river and setting it free on Christmas day, which is not highly recommended since the fish rarely survive, but some families like the idea of “saving “ a carp and setting it free. Krčín pond, photo: Ondřej Tomšů Carp cultivation dates back to the 11th century, when monasteries maintained fishponds for raising carp, but the greatest upsurge of fishpond cultivation came in the 15th and 16th centuries, when most of the fishponds in South Bohemia –dubbed the country’s “lake district” – came into existence.

Every year from the middle of October till the end of November, fisheries clear their ponds, netting carp for the Christmas season and that event itself has become a part of the Christmas tradition for people living in the vicinity of fishponds. Whole families turn up for a day-long trip in which they brave the cold to watch fishermen in rubber suits pull in nets full of frisking carp, but also some pike and catfish. Usually some of the fresh fish is grilled at stalls on the spot for visitors to enjoy with beer or wine, and most families buy fresh carp to take home.

Radio Prague recently attended the clearing of lake Krčín, in southern Bohemia, and spoke to the head of the Třebon Fisheries Josef Malecha, who was overseeing the process. Josef Malecha, photo: Ondřej Tomšů “What you see here is largely carp, because it is an indelible part of the Czech Christmas. We have considerable know-how in breeding carp, handed down from generation to generation over the last 500 years. Our fishponds are an ideal environment for them and we constantly work on improving their quality. So carp is what the Czech consumer wants.”

Carp breeding is a carefully controlled process so that the fish reach an ideal weight for the Christmas season. Josef Malecha explains.

“We have detailed information regarding the growth of fish in every lake, and random weight checks are made which enable us to respond to the given conditions, whether to provide more food or different food so that the fish reach their ideal weight for Christmas and we can meet the requirements of our clients. Here we are expecting to net some 700 quintals of carp and 200 quintals of other breeds such as catfish and pike. The carp bred here is the so called European carp and weighs on average two to two and a half kilos.” 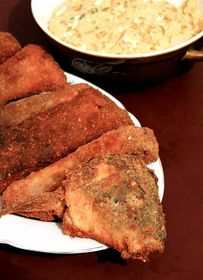 Photo: Barbora Němcová Most of the carp netted in South Bohemia ends up on the Czech Christmas table, but some of the fish are also exported to Italy, France, Germany, Austria, Poland and Slovakia. Its price on the home market is expected to be slightly higher because of the summer droughts but Josef Malecha says its taste should be as good as ever. He says his own Christmas would not be complete without it.

“I have to say that I much prefer carp, carp fried in breadcrumbs is my absolute favourite. I can consume eight large pieces in the course of a single meal. Of course I like other kinds of fish as well, the pike perch or catfish are also delicious, but, given a choice, I much prefer carp. Most people stick with the traditional recipe but there are many delicacies you can make from it – a colleague of mine makes carpaccio from carp and a tartar steak from it is supreme!”

Every family has its own favourite recipe for carp and carp soup. Should you decide to try this traditional Czech Christmas dish, one last piece of advice – they say that if you put a fish scale under your plate for the Christmas meal, it will bring you money and luck in the coming year.