The 100th anniversary of the revolution bringing the Bolsheviks and Vladimir Lenin to power in Russia is being marked with discussions and exhibitions in the Czech Republic. Although the events preceded the creation of a separate and independent Czechoslovakia around a year later, Czechs and Slovaks were very much caught up in what was happening.

Armed soldiers carry a banner reading 'Communism', Moscow, Russia, October 1917, photo: CTK The rapidly changing and dramatic events in Russia since the earlier revolution of February 1917 which overturned the Tsarist regime were very much the focus of Czech and Slovak attention as Tomáš Garrige Masaryk tried to create the impetus for Allied support for a separate state for Czechs and Slovaks from the Austro-Hungarian empire.

One trump card in those moves should have been the Czechoslovak legion, a fighting force which eventually numbered 100,000 from former Russian prisoners of war, that should have fought on the Allied Side. Historian Radomír Vlček explains:

"The question of the Czech, or Czechoslovak legion, was envisaged by Masaryk, the same as the legion in France, as the military force of the future state. He had to explain and convinces other European countries that here there was already a clearly defined military force which has nothing to do with Austro-Hungary and for its interests and its nation." 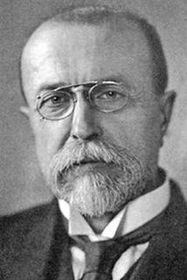 Tomáš Garrige Masaryk, photo: Public Domain But while members of the legion had proved their worth in the July 1917 Russian offensive, Russia’s involvement in the First World War was coming more and more into question. And the Bolshevik’s wanted to end the war at almost any cost. But initial Czech reaction to their coup was subdued:

"A majority of politicians and the public when they heard the news took this as yet another change in Russia, a minor change. This was typical for [Tomáš Garrige] Masaryk and Karel Kramář who thought that these were, yes, extreme left wing forces who had gained power but that this was a short term affair."

But as Bolshevik intentions became clearer, when the Tsar and his family were murdered and civil war broke out in Russia, one major figure in the movement for Czechoslovak independence Karel Kramář lined up with those calling for the Czechoslovak legion to intervene against the Bolsheviks. Radomír Vlček: Soldiers get ready at their position atop of the Kremlin Wall in Moscow, Russia, October 1917, photo: CTK "Karel Kramář was for intervention. He did not believe that there would be a renewal of some sort of democracy. Kramář was a lot more connected to the old Russia. His wife came from a Russian aristocratic background and that influenced his opinions. He was therefore for the participation of the then emerging Czechoslovakia [in the Allied intervention]. That created a major rift between Kramář and Masaryk."

That rift even revealed itself at the Versailles Peace Conference. But Kramář’s star was waning and a more pragmatic line towards the Soviet Union evolved. And over time Czechoslovak investments, such as by the Bat’a shoe company, also took place. What Vlček describes as correct but not warm relations with Moscow eventually culminated in diplomatic relations being renewed between the countries:

"In foreign policy terms, the Soviet Union was finally recognised in 1934. This was largely thanks to Masaryk’s standpoint that Russia would not always be that way, that it would continue to be Bolshevik." 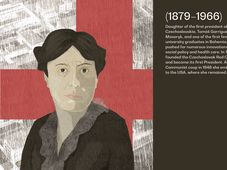 Daughter of the first president of Czechoslovakia, Tomáš Garrigue Masaryk, and one of the first female university graduates in Bohemia,… 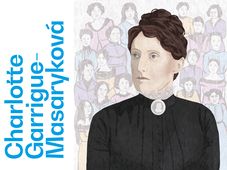 Giant of Czech history T.G. Masaryk born on this day in 1850

Saturday is the 170th anniversary of the birth of Tomáš Garrigue Masaryk, founder and first president of Czechoslovakia and one of…